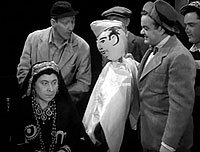 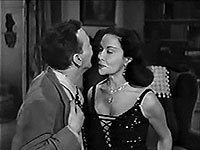 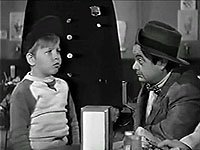 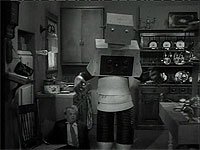 I think what distinguishes this BB film from the 3 others I've come across is that the setting is more interesting, the support cast has better characters to play, and for some reason Huntz Hall's usual manic mugging and mannerisms seem more appropriate to the setting. I suppose that's because this is very similar in tone and structure to some of the Abbott and Costello films, and Hall's over-the-top double takes and freak outs work the same way that Costello's would in similar situations.

I have to say that it was very clever of the producers to make this "Bowery Boys Meet THE Monsters", instead of "...SOME Monsters", because the title makes you think you will see Dracula, the Mummy, Frankenstein's monster, etc...instead, we get some generic substitutes. But I wasn't really disappointed...rather than have the classic Hammer archetypes be cheapened by yet another comedy ripoff, the screenplay just has fun with the idea - for instance, one is "a" vampire, and makes no attempt to pretend that this is the "Prince Of Darkness", so it doesn't hurt to see the idea played for cheesecake value. So it is with the mad scientists, the robot, the man eating plant, the JekyllHyde formula, etc. The "monsters" are different enough from the usual run to add an element of freshness to the film.

Also, the timing seems a little tighter and the director keeps things moving along. The "house full of monsters" set up allows for a nice rapid fire series of sight gags and word play and slapstick, and (as I said), the supporting cast get to be funny and interesting in their interaction with each other, as opposed to just being the straight men for the Boys.There's actually a bit of an Addams family dynamic that makes things go better than if the monsters just lunged out of the closet at our Boys.

This was my fourth Bowery Boys film (how I came to see four of them is a long story), and I can't say I'll be unhappy if I never see another one. But it was the most enjoyable of the four, and it raised my opinion of their abilities and their film career.