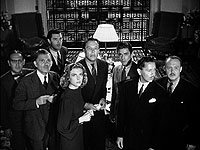 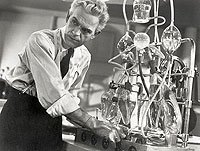 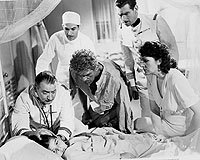 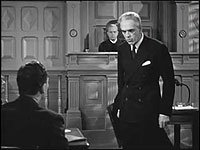 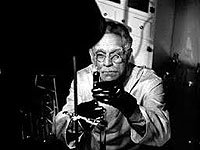 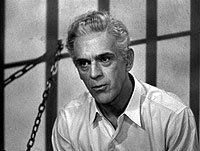 In the 1930s, Boris Karloff made several films with VERY similar plots. In these films, he was killed and returned to life--with BAD results. The main plot for this film is from Karloff's "The Walking Dead" and very similar to "The Man Who Lived Again". Clearly "The Man They Could Not Hang" was a VERY derivative film! Yet, despite the very repetitive nature of these films, they are very enjoyable.

The film begins with Karloff doing some strange research that will allow him to do heart transplants. He gets one of his assistants to allow him to kill him--with the intention that he would then revive him with his new experimental system. However, the assistant's girlfriend (Ann Doran) is an idiot. Instead of letting Karloff finish the experiment, she runs for the police. The police break in and won't allow Karloff to revive the man--insisting it isn't possible and jailing him. Soon, Karloff is indicted for murder and is tried, convicted and sentenced to death. However, another assistant is able to obtain Karloff's corpse and soon revives the once-good doctor. However, now Karloff is no longer a kindly researcher but decides to spend the rest of the film killing everyone responsible for his death sentence. I liked this portion best, but unfortunately, his quest is cut short and the film ends.

Overall, enjoyable and Karloff, once again, is terrific. The only big problem, other than the repetitive nature of the script, is the acting of Doran--who, frankly, was terrible in the few scenes in which she appeared.