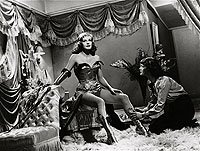 I watched the complete German-language version titled "Alraune" with English subtitles. It ran 87 minutes in what I think was a PAL version that reduced its 92 minute time by 5 minutes by running faster.

I see this film, not as a fantasy, but as film noir. Erich von Stroheim plays a doctor who has been drummed out of the profession because of his experiments, not so controversial today. He has introduced the voluntarily-donated sperm of a double murderer, about to be executed, into the uterus of some lowlife woman. This is what is called artificial insemination. This union has produced a real human being (not an artificial creature) that he raises as his daughter. This is the beautiful Hildegard Knef. He chose the parentage intentionally to see if they'd pass on their unsocial behavior genetically.

Knef is now a fully grown woman of about 20 but Stroheim tries to keep her under his thumb in a strict boarding school. She's expelled and then she starts attracting young men, namely Stroheim's nephew (Karl Bohm) and his two friends. One is an artist and the other a count. Stroheim himself seems to want her for himself and so does his associate, a middle-aged doctor who knows Stroheim's secrets. Knef is flirting with all these men and also the horse keeper employed by Stroheim. They are all falling in love with her, but when Stroheim tells Bohm about Knef's parents and background, he leaves for medical school in Paris and breaks off relations with Knef. He is the only one she truly loves, and he really loves her.

In one way or another, with her sly involvement, death starts to come to her would-be lovers. She does not know of her origin but wants to find out and eventually does. Her character is a genuine femme fatale or kind of a siren who has the capacity to lure men to their deaths without actually participating in them.

There's quite a lot of noir photography throughout this film. Since there is no outright criminal or crime but rather a series of romantic attractions and entanglements, the story plays out as a romantically-tinged psychological noir.