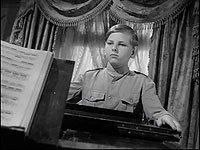 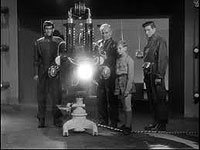 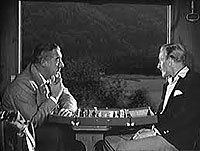 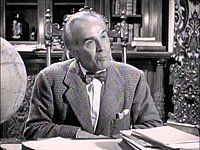 Although he looked like a VERY ordinary man, in the late 1940s and throughout the 1950s Paul Douglas was an actor highly in demand--particularly at 20th Century-Fox. He's appeared in lots of big-budget prestige films such as "A Letter to Three Wives", "We're Not Married", "Executive Suite", "The Solid Gold Cadillac" and "Clash By Night". In addition, he was a very frequent guest star on television. In light of this, I have no idea why he would ever agree to star in a silly film like "Gamma People". When I tell you the plot, you'll understand what I mean.

Two reporters are traveling through Europe by train. One is an American (Douglas) and the other is a Brit (Leslie Phillips). However, in a hard to believe twist, the train car they are on (and no one else) become uncoupled from the train and drifts into a tiny fictional communist country. Once there, they are initially arrested but they soon let them go--for fear of an international incident. And, while they are waiting to get out of this country that seem stuck in the 19th century, the authorities give them the run of the country--but they also are careful NOT to let them learn about the 'Gamma People'. What, exactly, are Gamma People? Well, it seems these evil commies are using gamma rays in order to turn the people into obedient little pawns of the State! In a way, this combines two B-movie genres--sci-fi and Red Scare films. Can Douglas and Phillips learn the truth AND manage to make it out of this dictatorship alive?

In addition to being an odd plot, this film is odd because of its tone. Often it's played for laughs--yet other times it's deadly serious. This is often a bit jarring and I really think the comedic elements should have been excised--or at least toned down quite a bit. I think the paranoid deadly serious stuff was a lot more entertaining and in keeping with the story idea.

All in all, this is a film you watch less for the film's quality and more because of its historical value. It certainly is an odd little curio from the 1950s! Not great but enjoyable...if that makes any sense. Plus, I learned an invaluable lesson. If I am ever stuck in a repressive country, I should do what Douglas does--loudly complain and start sluggin' folks!