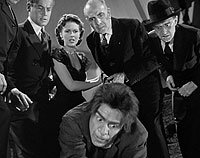 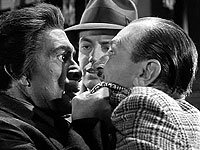 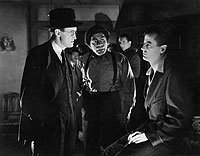 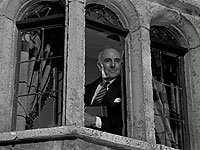 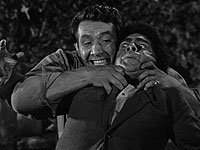 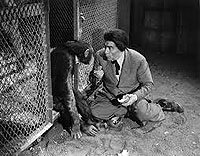 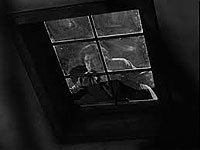 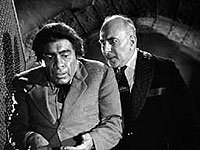 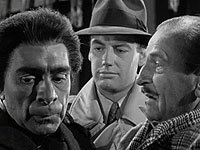 Renault's Secret" is a remake of "The Wizard" a lost film from 1927 that was in turn based on "Balaoo" a 1912 short story by Gaston Leroux. In "The Wizard" the plot involved a mad doctor (Gustav Von Seyffertitz) using an ape like creature to seek revenge on those he considers responsible for his son's execution. It was more of a comedy horror, with a couple of dumb detectives - a genre that was very much in vogue in the late 20s. . Renault's Secret" doesn't play it for laughs - in fact it tries to bring a lot of sensitivity to the distasteful subject matter.

Dr. Larry Forbes (John Sheppard) arrives in France (the locale of the original Leroux story) to meet his fiancée Madelon Renault (Lynne Roberts), the niece of Dr. Renault (George Zucco) another scientist. He is greeted by Noel (J. Carroll Naish), a zombie like creature who has a strange affection for Madelon. He also meets Rogell (Mike Mazurki), Renault's gardener, who by intimidation keeps the villagers in fear. Next morning one of the guests at the inn is found murdered - he had accidentally fallen asleep in Forbe's room. Suspicion falls on Rogell and he does nothing to show he is innocent. Weird things begin to happen when Forbes arrives at Dr. Renault's. Noel almost has a car accident when he "senses" a dog on the road - the same dog who savagely attacks him before the evening is over.

If you watch the original trailer (that is on the DVD I have) it gives almost everything away. Dr. Renault's secret is - he has captured an ape in Java and through experimentation and plastic surgery has tried to make him more human like. J. Carroll Naish engages your sympathy from the start, not only with his plaintive voice which is like a slow motion Peter Lorre but he also carries himself in a hunched fashion with a simian walk. George Zucco is the repellent Dr. Renault, who keeps Noel in a fearful, subservient state with the help of a huge whip. It is interesting that Rogell is part of an experiment as well - a failed experiment because Rogell, coming from a family of criminals, his bad character is ingrained in him and will never change. A spate of murders happen in the village and from the start it is not hard to figure out who it is - with shots of a concerned Noel looking at his hands!!!

George Zucco was a British stage actor who earned the nickname at Universal "One Take Zucco". He appeared in so many monster flicks in the 40s ("The Mad Ghoul", "Voodoo Man", "Fog Island") usually for smaller independents that if you look up Mad Doctor or Mad Scientist in the dictionary you will probably find his picture.

P.S. The print I viewed was so clear that I could even see strings used as a pulley when Rogell was thrown in the water.

Review by kidboots from the Internet Movie Database.