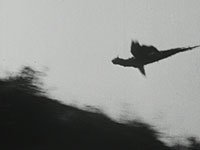 I recall seeing this on television when the tube only showed depreciated B feature movies, and the only late at night, as if the stations were ashamed of their offerings. And in fact now, when I'm considerably more than ten years old, I don't find it nearly as enjoyable as I did then.

There doesn't seem to have been much more than minimal effort put into any of the elements. Script, acting, direction, production design -- they're all abominable. Oh, Quetzalcoatl was a genuine Aztec figure all right, along with a dozen other gods in the pantheon that are rarely mentioned in fiction because they're not so threatening. The Aztec language has fed some words, however much filtered, into English besides the name of Quetzalcoatl. "Tomato", for instance, comes from Aztecan "tomatl." And "axolotl", a kind of giant salamander, is an Aztecan word too. (I'm throwing that in for addicts of the Times crossword puzzle.) Not to call names, though, because name calling leads nowhere. Here's a real example of what I mean. George Zucco is the resident batty archaeologist living in a small Southwestern town with his step daughter, Hope Kramer. You may be surprised to know that Montezuma buried millions of dollars in treasure in New Mexico before "moving south." They got the direction wrong. Cultural influences and presumably people moved from south to north.

Well, that's not the example I wanted to give. Here's the example of little effort that I wanted to give. Zucco is sitting on top of this mountain of hidden jewels, uninterested in the money, satisfied with the knowledge that it belongs to him. As he tells his daughter, "It's mine, do you hear me? All MINE." But the legend of the treasure brings strangers who start poking around. Zucco's response is to plant one of Quetzalcoatl's feathers on the poker, let loose the Flying Serpent itself, and have the victim's throat torn out by the monster.

Wait. I haven't got to that example yet. Here's that example. The first guy to get his throat torn out by Quetzalcoatl for nosing around is a bird specialist who is intrigued by one of the Flying Serpent's unusual feathers. And I could SWEAR that the character refers to himself as an "orthinologist." I am CERTAIN that he alludes to "the Rosita Stone." No, I'm afraid they didn't work very hard on the story or on the film. A sharp radio reporter and his comic side-kick assistant descend on the small town and they start poking around, a habit which, as we have seen, is a ketchy business. The New York radio station that Ralph Lewis comes from is "XOR". Now, there was, and is, a WOR in New York. But if there is an XOR anywhere, it has to be in Mexico because the allotted call signs for commercial radio stations in the US are either "W" or "K", while "X" is confined to Mexico.

George Zucco's attempt to kill his daughter is foiled by the reporter and Zucco is hoist by his own petard.