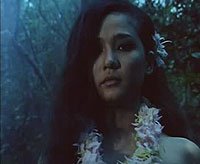 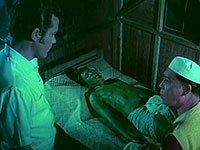 Other than an opportunity to watch a bad film, the other reason to see MAD DOCTOR OF BLOOD ISLAND is a chance to see Angelique Pettyjohn. Miss Pettyjohn gained some measure of fame among sci-fi geeks for appearing as the silver-haired Shanna in the original STAR TREK (in "The Gamesters of Triskelion"). While not a great actress, her striking looks and assets are hard to miss.

The film is about a strange island where people have green blood and a freaky monster that looks like Man-Bear-Pig (or is it the stinky cheese man?) lives. An agent from the government and a missing doctor's daughter arrive on the island to investigate. But, to their surprise, the island is a killing ground for the stupid looking creature. Who it is and why it behaves in such a nasty fashion is what the film is all about...if you particularly care (which I did not).

MAD DOCTOR OF BLOOD ISLAND is clearly an ultra-cheesy low-budget film that has an extremely low production values--as evidenced by the silly script, occasionally bad acting and headache-inducing zoom. Let me explain the 'zoom'. To heighten the horror (i.e., to cover up the fact it was all so dull), the film maker decided to have the camera zoom in and out again and again any time the monster appeared. It was very unpleasant but tended to hide the stupidity of the monster makeup. Plus, it let the dumber members of the audience know when to be afraid (though it may just make you nauseous). Surprisingly, for a low budget film, it has intense gore that actually is amazingly realistic and gross--so people who love looking at guts from a butcher shop will enjoy the film (and at least half the $219.87 budget went for animal guts and realistic blood). In addition, there is a bit of not particularly enticing gratuitous nudity in the film--pretty hot stuff for 1968, but not very explicit (or sexy) by today's standards--and not enough to encourage the perverts out there to seek out the film.

Overall, this is the sort of film you might actually want to see...if you are having friends over and want to do your own home version of "Mystery Science Theater". Otherwise, it's just too dull and stupid to recommend. The only reason it gets a 2 is that the guts were reasonably realistic--and much of them were real guts.

Oh, and for all the Star Trek fans, if you DO want to see the film just to see Miss Pettyjohn naked, don't bother. Although she's an amazingly beautiful woman, she keeps her clothes on for most of the film--and there's not that much of her to see when she does. If you INSIST on seeing Pettyjohn naked, then by all means jump ahead to about the 76 minute mark to see the naughty bits. However, her finally taking off her clothes made no sense at all, as the Stinky Cheese ManMan-Bear-Pig or whatever it is was still roaming the island killing. Talk about a BAD time to get naked!! And, for that matter, I STILL don't think this makes it worth seeing this dull flick.