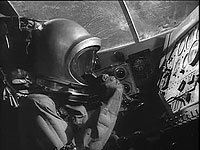 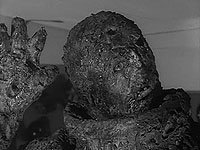 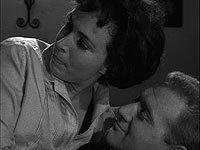 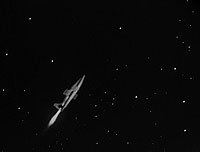 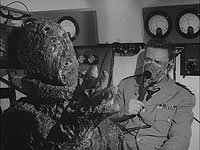 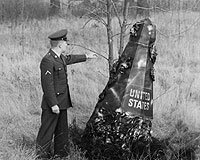 First Man Into Space is set in Albuquerque where the US Navy are trying to send the first man into space, that man being pilot Dan Prescott (Bill Edwards). Dan pushes things too far & disobeys orders going higher than he should, while in space his spaceship is engulfed by a mysterious cloud of meteorite particles which attach themselves to the ship & Dan inside. Crashing back down to Earth in Mexico Dan has undergone a hideous transformation into a space crud encrusted monster who needs to feed on blood to survive, it's up to Dan's brother Commander Charles Prescott (Marshall Thompson) to hunt Dan down & try to help him...

This English production was directed by Robert Day & feels like an attempt to cash in on the success of Hammer studios The Quatermass Xperiment (1955) in which an astronaut is sent into space comes back turned into some sort of alien monster, personally I think First Man Into Space is a little slow going & not as good as Hammer's effort. The script by John Croydon & Charles F. Vetter for some reason is set in America even though the film was financed & made in England, disappointingly even at a scant 75 minutes in length First Man Into Space felt really padded & slow moving. The first 30 odd minutes are totally forgettable with the initial exploration into space which goes alright & it's the second time Dan goes into space that he gets turned into a monster where I feel it should have been the first, I mean the makers could have hit the ground running with the monster turning up within the first 10 minutes but for some reason they padded the story out. I wouldn't call it a bad film, there's a few minutes of decent monster action & it's competent throughout but I will probably have completely forgotten about it by the end of the week.

Don't be fooled by the DVD box artwork, the monster feels like a secondary sub plot for the majority of the film before it turns up at the end. The monster itself is quite good with it's deformed space mud encrusted face. There's a bit of blood but nothing too graphic. The special effects aren't too bad either, even though the spaceship looks like an ordinary US Navy jet plane the model work is alright as are the scenes set in outer space.

Technically the film is OK, filmed in black and white the cinematography is satisfactory & help make the very English locations look American. There's plenty of stock footage as well just to pad things out even more. The cast are alright, look out for an appearance by Roger Delgado who would later go on to star in several Doctor Who stories from the 70's as the Master.

First Man Into Space is a passable way to spend 75 minutes even though it still seems slow & padded. The monster is decent as are the effects but when all said & done it's nothing special. Although not credited as such AIP remade this in the 70's as the rather good The Incredible Melting Man (1977) which is much, much better & a lot gorier.