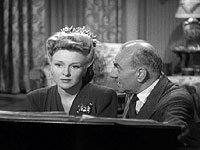 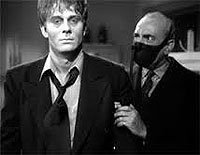 Professor of chemistry, Dr. Alfred Morris(George Zucco), has perfected a type of poison gas derived from a native Mayan culture who used such methods to not only kill but to use the victims after death as slaves for their own diabolical reasons. He includes a student in his research, Ted Allison (David Bruce), a wunderkind with a scalpel, with tragic results for the pupil because of the insidious acts of the professor.

Both men adore a popular soloist, Isabel Lewis( Evelyn Ankers), on the verge of her first country-wide tour and this motivates him to use Ted as a weapon to potentially kill the man she secretly loves, her pianist, Eric Iverson (the debonair Turhan Bey). While following Isabel on tour, Dr. Morris desecrates graves, forcing Ted, a zombie under his hypnotic spell, to despoil corpses for their hearts!

The story is truly depraved if you think about it. I just delight in how fiendish Zucco is. I mean Zucco was just a wiz at depicting sociopathic mad scientists willing to use their brains to terrorize. It's the classic example of using your smarts for malicious intentions instead of contributing to society in a more beneficial manner. The reprehensible actions of Morris certainly adds emphasis on Ted's unfortunate fate as he must obey when induced in the zombie state, which often occurs when he is under extreme duress.

One scene has a reporter, "Scoop" McClure(Robert Armstrong, given the "determined and wisecracking newsman" role), working the ghoul grave desecrations (the story truly heats up when a cemetery guard is killed by a crushing blow to the skull by Morris who, in turn, has Ted mutilate the fresh corpse with the surgical knife, extracting the heart), with a bright idea—working in concert with a funeral owner—of hiding in a coffin inside a funeral parlor hoping that the culprit will show up so he can catch him in the act, not knowing that Morris had an accomplice, resulting in a grisly demise (not only is the surgical knife used to incapacitate him, but Morris then strangles him!).

The film utilizes the puppet-puppeteer angle where Dr. Morris uses Ted for his own twisted purposes, a gifted scientist, abusing his genius in a sordid fashion to, or as he would believe, have Isabel all to himself (an obsessive, delusional desire for a woman who respects him, but doesn't have a single, solitary clue that this well-renowned scientist is the madman behind the grave mutilations). Evelyn Ackers, a Universal beauty used in a lot of the B-movies for the studio, as always, is the woman of interest for all three male stars, her impressive figure once again costumed by those fabulous Vera West dresses. This movie uses the terrific sets Universal Studios always provided, such as foggy graveyards, Morris' laboratory, and lavish apartments (including the noisy newsroom where McClure works).

This movie is all about Zucco; he just had a knack for portraying the cunning, menacing, cerebral maniac, who appears gentlemanly, polite, and cultured, masking a savage, homicidal mind without the moral compass or conscience needed to prevent the events which transpire in THE MAD GHOUL. Bruce effectively convinces as a victim who not only loses the love of his life to a friend (Ted introduced Eric to Isabel), but is unknowingly helping a man he trusts defile the dead of their hearts. The reason for the desecrations is that Morris uses ingredients the heart provides to return Ted to a more human state after each zombie attack.