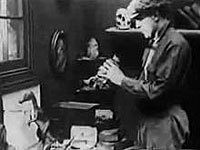 This early film, in my humble opinion, is one of the greatest surviving gems of early film. The stop-action dinosaurs are as good, considering the technology available, as the great Harryhausen figures in the 60's and 70's.

I was a bit concerned when the film started that it would be really corny, and when the boys uncle tries to get his best friend to pose for a risqué portrait, I began wondering exactly what kind of film this would be. But my fears were unfounded, and I thoroughly enjoyed myself. The canoing scenes are reminiscent of a lot of early travel films, and the telling of scary stories around the campfire brings back fond memories of my own grandfather.

As a grandfather now myself, who loves to relate scary stories to my young grandchildren, I absolutely love the ending scenes, and the reaction that the boys have to hearing this story from their 'Unca' ... well worth the watch - still as enjoyable as it was almost a hundred years ago.

Review by Dusty Grein (dustygee123@live.com) from Oregon, USA from the Internet Movie Database.