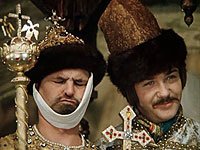 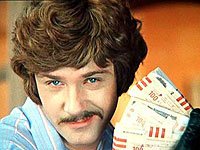 If you think you've got problems, try this one : 1) your frivolous wife has left you for another man 2) your prototype for a time machine is mocked and disregarded 3) you live in a large apartment building where many dislike you for causing noise, stench, electricity cuts and so on 4) the nosey superintendant of the apartment building has taken a particular dislike to you 5) by mistake, you have just sent the said superintendant back deep into the past, in the company of a cheeky burglar and 6) you are now saddled with tsar Ivan the Terrible himself, who is but doubtfully suited to life in 1970's Moscow.

Welcome to "Ivan Vasilevich menyaet professiyu" (I hope I'm spelling this right...), a barn-storming and whacky comedy which succeeds in mixing and matching subjects such as the science fiction genre, pop music, Russian history, Russian cinema and Ivan the Terrible. These last three topics are combined in a deliriously funny take, pretty much à la Mel Brooks or à la Woody Allen, on Eisenstein's blistering "Ivan" series. (Watch for the scene where the Swedish ambassadors come to Court in order to make their demands - it's a clear reference to Eisenstein's slimy or vicious grotesques.)

The movie does contain "it was all but a dream!" elements, but for once I'm giving this a pass : here the device is used as a comedic cherry on top of the cake, not as a means of getting away with an unfinished screenplay or a failing imagination. Besides, it's hard to get mad at a comedy which boasts the funniest, silliest time machine ever put on film...

Lastly it should be noted that the locations and sets used for the historical (or rather, pseudo-historical) scenes are extraordinarily beautiful and sumptuous. It is strange to consider that, in real life, buildings of such beauty, imagination and purity could serve as a background for demented violence or treacherous plotting.

Review by myriamlenys from the Internet Movie Database.