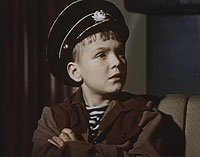 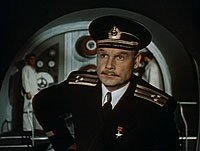 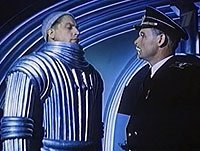 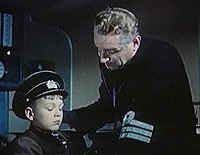 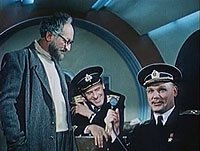 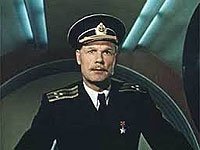 This film done in 2 parts (195556) seems at first to be a very James Bondian espionage film with sci-fi elements thrown in.....Ultimately it winds up almost like a Gerry Anderson style live action flick...Which is not a bad thing.

It involves enemy agents (from an unknown nation but it may be assumed it was the US) that have secret automated facilities set up in the Atlantic and Pacific oceans for the purposes of sinking ships.

The super submarine "Pioneer" and it's intrepid crew is dispatched to find the source of these mysterious sinking's...Unknown to the captain, his chief engineer is working for the bad guys, intent on stopping their efforts, at any cost...It seems the real chief had a twin brother who was a circus acrobat who murdered and replaced him.

There's a lot of subplot here...

Ultimately the ruse is discovered thanks to an intrepid diver, a kid rescued from one of the shipwrecks and the sub's female doctor...Who almost winds up as fish food when the engineer pulls her into the airlock during his escape....This, after leaving a time bomb on board...Nice guy!

The chief swims (with the help of a marvelous diving suit) to an Island where the fully automated hi tech base is located..As he comes ashore there are strange Easter Island-like statues that bear a remarkable resemblance to Elvis!

The chief, using voice recognition tech gains entrance to the facility In a set that would make James Bond's set designer Ken Adam drool the chief launches a whole series of torpedoes aimed at the sub. They bear a remarkable similarity to Star Trek's photon models...

The hero, discovering that the airlock's been sabotaged rides a torpedo to the island and subdues the chief..and destroys the torpedoes.

The special effects which are usually first class in most Russian films, run from so-so to pathetic....Looking like Derek Meddings' earliest efforts in programs like SuperCar...One cannot fault the imagination packed into this film though....The design of the sub was very interesting and unique, and the gadgets and design within had an oddly deco look to them. Sadly, the sub suffers from the "bigger on the inside, smaller on the outside" syndrome, as there was an actual "full sized" floating set used for surface shots.

There are scenes that indicate the film makers had seen Disney's "20,000 Leagues Under the Sea" (1954) as well as Metro's "Mysterious Island"-(1929). The diving suits look like a cross between those seen in the two aforementioned films.

There are enough gadgets and goodies in this film to make even the most avid James Bond buff blush!....How about a grand piano that's a secret code transmitter or a device that looks like a retractable tape measure that will support a man's weight and allow him to scale the sides of buildings, that and a really spiffy car chase.

Review by vawlkee from OC California from the Internet Movie Database.