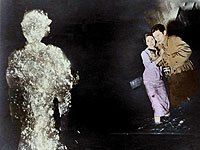 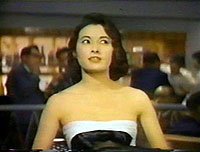 Even though it is not, in totality, a great film, Ishiro Honda's "The H-Man" (or "Beauty and the Liquid People" as it was named in its own country) has some remarkable things in it. The cast is a harvest of reliable acting talents; the movie features some tremendously effective special effects; and the photography is luscious and rich with color. What is most remarkable about "The H-Man," however, is the way it combines two radically different genres, and yet gives each genre its due and moments to shine. If the movie were just a horror story or just a yakuza melodrama, it still would have been an interesting picture. And once combined, they form one of Toho's most intriguing, if uneven, efforts to date.

We also get Honda's usual symbolism, once again on the atomic bomb. And once again, as in "Mothra," it is applied in a rather subtle manner. Honda opens the movie with an eye-popping, wholly unexpected nuclear explosion and then shies away from talking about his message for quite a spell. The eponymous H-Men, a race of liquid organisms that can take the shape of humans and dissolve any living thing they come into contact with, are supposedly an aftereffect from nuclear testing in the South Pacific. When they disintegrate a person, leaving nothing but their clothes behind, the area is teeming with radiation. But Honda does not take the cheap shot; he does not drag out his story with chatter and contemplation about man messing with the balance of the world. His only lapse is at the end, when he allows Takashi Kimura's screenplay to blabber, via an unimportant supporting character, about how man should stop tinkering with nuclear energy, else let the H-Men take over in the future. Here, the allegory comes on a bit thick, and the end monologue does not come across as hauntingly fresh as it was in "Godzilla," but instead, on the pretentious side.

For the most part, however, both Honda and Kimura allow the double-edged plot to take center-stage. It's a combination I very much enjoyed, particularly the half about the Japanese gangsters and the police department's attempts to drag them into the gutter. There are some terrific character actors in the film's police force, including Akihiko Hirata, Yoshio Tsuchiya and Eitaro Ozawa. Now granted, the policemen are not developed as really anything but policemen – straight-shooters who seldom smile and scoff at the suggestion that liquid-men are running amok in Tokyo – but the actors breathe such life into them, as to make them interesting. Take Yoshifumi Tajima, for instance. He plays the most skeptic cop you could ask for – no real depth of character – and yet when he winds up being killed by one of the monsters, I actually felt a bit down. I liked that character, or at least Tajima's interpretation of that character.

If only there was more life put into the love story. And this is what I think disqualifies "The H-Man" from being a truly great film. The movie would like us to care about the couple (a yakuza's moll and a daring young scientist trying to warn the cops of the impending danger), but the emotional involvements adds up to zero. This is not a reflection on the two performers. Kenji Sahara and Yumi Shirakawa are superb talents and even proved two years before, in Honda's better film "Rodan," that they can effectively play lovers on film. But "Rodan" gave them things to do together, moments to shine in each other's company. The screenplay of "The H-Man" asks us to believe in their chemistry after they meet very briefly, pass a few insignificant words, and when Shirakawa sobs into Sahara's shoulder. I really wanted more meaningful scenes between them.

Shirakawa, on the other hand, does run away with the show, and she does have the best-rounded character. From the get-go, we like this soft-eyed, confused girl, and we sympathize with her when both rival gangsters and skeptical detectives refuse to quit hounding her. And at the end, when a snarling gangster starts dragging her through the sewers of Tokyo, all the while getting themselves surrounded by liquid-men, I felt myself really worrying about what would become of her, and really hoping her captor would get his comeuppance.

But the horror story works well, too. Most of all, because how Kimura's screenplay depicts the H-Men as mostly a predatory substance, maintaining very little of what made them human to begin with. It's not at all like the cartoonish demeanor of the organism from "Space Amoeba." The H-Men attack like parasites ensuring their own survival. When one of them takes the form of a man, in which case they glow with a tremendous neon aura, they are dazzling. But I really like how most of the time, they melt down into a moving sludge that crawls up and down the walls. There are some laughable moments (such as a freeze-frame shot of a victim while animated sludge consumes her body, mercifully cut from the U.S. print of the picture), but the good moments far outnumber the bad ones. Part of the fun of these special effects is just wondering how, given 1950s technology, the staff could pull it off. Especially when sludge starts crawling out of a pool of water and we cannot see any signs of a reverse-speed shot. Aided by Masaru Sato's gentle yet ominous music, the monsters do have a presence of their own.

It is such a relief to finally have Ishiro Honda's "The H-Man" widely available in the United States. For the picture really is a delightful little experience. Even its U.S. print maintains the fun, making a few small edits for pacing and completely honoring the original premise. With some reservations, I would even go so far as to call this one of my more favorite Toho movies of the 50s.