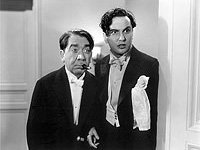 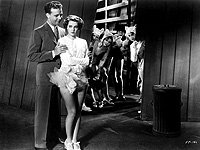 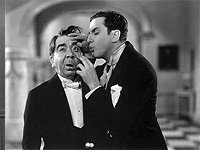 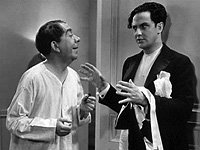 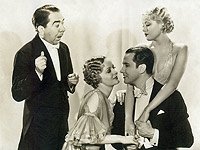 "It's Great to Be Alive" is one of the weirdest movies I've ever seen. It's a science-fiction comedy, similar in spirit to "Just Imagine" (1930), although not quite as musicalised. This is a dumb movie, but it's so cheerful in its mindlessness that you'll have a good time watching it... ONCE. I'm not sure it would stand up under repeated viewing. A major flaw is the casting of Raul Roulien (a bland and untalented actor) in the central role.

Carlos Martin (Roulien) is a dashing young aviator. When his girlfriend jilts him, he decides to forget her by embarking on a trans-Pacific solo flight. (That'll do nicely.) His aeroplane develops engine trouble mid-ocean, and he is forced to land on one of those tiny little uninhabited islands that show up so frequently in magazine cartoons.

Meanwhile, the entire world suffers from a global epidemic of a new disease called masculitis. All male humans are rendered sterile. We see a weird scene in which two uncredited actors wearing bizarre makeup and fright wigs give a bad imitation of two scientists trying to find a cure for masculitis. One of the actors (the one with a bushy grey fright wig and a cod German accent) is apparently meant to be Einstein; the other one (with a bushy black fright wig and a cod French accent) is obviously meant to be a real person too: it took me several minutes to figure out that he was impersonating Auguste Piccard, a scientist who was briefly famous in the 1930s. Anyway, not even Piccard and Einstein can cure masculitis: the human race is doomed!

There are some amusing scenes in which we see that all of humanity's institutions continue, but now they're run entirely by women. This includes the criminal underworld: public enemy #1 is now a she-gangster who seems to be a combination of Al Capone and Bugs Moran, who styles herself Al Moran (why not Bugs Capone?). She's the leader of an all-girl gang of racketeers. The League of Nations are nowhere to be seen (no loss), but we now have a Worldwide Congress, presided over by a woman physician named Doctor Prodwell. (That name was used previously in 'The Last Man on Earth', a silent film with the exact same premise as this one.) Dr Prodwell is played hilariously by Edna May Oliver, who gives the best performance in this movie. Edna May Oliver had a long distinguished career in dramatic roles, but only just occasionally had an opportunity to demonstrate her flair for comedy. She's brilliant here; this performance belongs in a much better movie.

Eventually, Carlos escapes that island to rejoin humanity, and he discovers that he's the last remaining fertile man. He is promptly kidnapped by Al Moran's all-gal gang, who try to auction him off... until the G-women (not G-men) arrive and declare him federal property. But now the Worldwide Congress want his services. Dr Prodwell decides that the women of each nation should purvey their charms for Carlos, and he will decide which nation he will repopulate first. (Nice work if you can get it.)

This movie makes a half-hearted attempt at being a musical, with occasional songs. There is a very strange musical climax resembling one of those burlesque-show 'Girls of All Nations' routines, in which each nation's finest female pulchritude display themselves for Carlos's approval. This number features some wince-making lyrics, such as: 'We are the women of Czechoslovakia. We are strong, and how we can sockya." The tunes and lyrics are awful, which may explain why no songwriters are credited.

"It's Great to Be Alive" is basically a dirty joke, spun out to second-feature proportions. It's worth seeing, just to get an idea of how weird Hollywood movies could become during the Depression. By the way, in 1946 a best-selling novel ('Mr Adam' by Pat Frank) used almost an identical premise (a nuclear experiment renders all males infertile, except one simpleton who was down a mineshaft at the time) and made a very funny story indeed: much funnier than this movie. I'll rate "It's Great to Be Alive" 5 points out of 10.