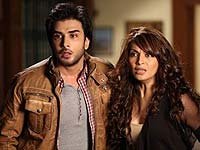 Posing as the new millennium's upgraded version of Ramsay brothers (of the 80s), Vikram Bhatt is now more known for his horror films instead of anything else made in the initial phase of his career. So strengthening this newly found unique status in the industry, Vikram continues to experiment within the same genre following the right vision but unfortunately fails to deliver anything exceptional when it comes to execution or in terms of thrill, excitement and horror expected from a film titled CREATURE released in 3D.

To give him the credit where deserved, yes the project can be rated as probably the first mainstream Hindi horror film talking about a strange, scary creature in particular, extensively focusing on its graphical depiction involving great amount of hard-work, expenditure and skill. However the other side of the coin is that this happens to be the only merit of the film as you are not going to find it that engaging, exciting or horrifying in comparison of any other creature movie seen before.

Actually a horror film revolving around A CREATURE has to be outstanding at three exclusive points in its script. First at the time of its entry, second while revealing the creature's hidden history of origin and third when it gets destroyed in the end with some distinctive trick or any other novel technique. Sadly Vikram Bhatt's CREATURE is not able to impress its viewers in any of the above mentioned points in its script and thus remains a below average, unentertaining film in totality to say it all.

Stating the three points individually, the creature's entry in the film is just OK with nothing spine chilling or exciting happening on the screen. Its existential history is not explained with any kind of interesting detailing or scenes and finally its destruction turns out to be more funny than scary mainly due to the over length, clichéd killings and poor execution towards the climax. For instance, the learned professor very well knows where the devil lives in some underground caves and the exact spot too. The caves which have the entry from just a 3 feel wide hole, later can also accommodate a whole jeep moving in, just at the right moment to save our heroine. Following the set pattern of a Vikram Bhatt horror film, a weak parallel love-plot is simply there to incorporate all the average songs thrown in randomly. Plus a particular sequence in the film shows the killing of a wild leopard by some hired hunters being celebrated with a photo session so fearlessly as if its not a crime in our country running the "Save The Species" campaign from many years now. In fact this was the most irresponsible insertion in the film demanding a severe criticism.

Adding to its few positives, CREATURE does manage to impress you marginally with the 3D visual effects generating a certain amount of curiosity around the huge demon having a long lizard like tale, green eyes and a manly built in the beginning. But as the film progresses further, the uninspiring artificial roar and boring, routine sequences having nothing fresh to offer completely kill the novelty of the concept introduced and one doesn't feel like enjoying the experience at all close to the interval.

Post intermission it fast becomes such a long, tedious film despite having an engaging concept of 'Brahmrakshsa' which could have been the key USP of the film pulling the viewer in. The writing fails to deliver anything above the routine, the cinematography and graphics try hard to deliver the expected in vain and background music doesn't bring in those chills which one wants to feel while watching a horror film revolving around a strange creature. Besides the way they all try to kill the demon in the climax, becomes funny instead of scary due to its poor monotonous feel and the annoying length.

Another major downer of CREATURE has to be the catchy promotional song "Mohabbat Barsa De Na Tu" featuring Surveen Chawla in a sensual avatar, which is no-way related to the actual project and the film doesn't have any of those sexy scenes too which are sure going to disappoint many sitting in the theaters expecting a lot more (especially from a Hindi Horror film.

As the performers, Bipasha Basu doesn't look fresh but tries to give a spirited performance minus any passionate bedroom scenes. The newcomer Imran Abbasproves to be a debutant more dependent on his good looks than the skills required but Mukul Dev performs decently in the role of a researching professor, who should have been given more mileage in the script as I strongly felt. Few in the supporting cast do it over the top like the paan chewing inspector and the bank manager, whereas rest of them are simply there filling up the space.

In short as the first Hindi horror film based on a specific CREATURE, this could have been a trendsetter movie with a chain reaction. But in the present format, its nothing more than another wasted opportunity to make an entertaining horror flick by a reputed name.

Review by bobbysing from the Internet Movie Database.