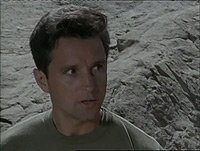 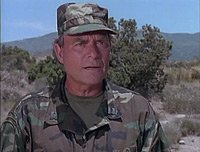 Dinosaur Island starts as a small plane flies over the ocean from Asia to San Diego where Captain Jason Briggs (Ross Hagen) is to hand over three deserters for trial, suddenly one of the engines cut out & the plane is forced to crash land in the sea. Captain Briggs & his mate Sergeant Healey (Steve Barkett) along with the three deserters Skeemer (Richard Gabai), Turbo (Peter Spellos) & Wayne (Tom Shell) make it to a nearby uncharted island with the injured Buzz (Bob Sheridan). Once on the island it becomes clear their problems have only just begun, poor Buzz is eaten by a giant Dinosaur & the rest of the men are captured by young & beautiful semi naked women from an Amozonian tribe & initially put to death by Queen Morganna (Toni Naples). However a cheap tattoo on Skeemer's arm saves them as the tribe believe the men to have been sent as part of a prophecy, soon the men realise in order to stay alive they have to kill the fearsome Dinosaur known as the 'Great One'...

Produced & directed by quite possibly the two worst director's working in Hollywood, namely Jim Wynorski & Fred Olen Ray I have to say that while Dinosaur Island wasn't as bad as I expected it's still an absolutely terrible film which shows just what sort of expectation level I initially had for it. I think the makers knew that Dinosaur Island was going to be bad so they play up to it & maybe this light hearted approach saves it from being a complete bore although please don't take that as any sort of recommendation as I will repeat the fact that I think Dinosaur Island is a terrible film. It's just a terrible film filled with bad one-liners, silly performances & awful special effects. The plot is pretty meaningless & makes no sense or has any central story of any worth, I mean the whole script is pretty bad from start to finish. The script only really exists to show lots of good looking women in not much clothing, the initial sacrifice scene for instance not only calls for a good looking woman to be tied up & scream her head off but for another topless woman painted blue to rip her bra off like all good human sacrifice rituals do, of course. Then there's scenes of women playing in a river, washing each other & taking their tops off, women wrestling each other & women generally looking good with the minimum amount of clothing on. At only 75 minutes long (what's with the spelling of the 'Ende' caption?) at least it's short but there's not even enough story to fill that scant duration, the plot is lethargic & I found it impossible to get involved in.

The special effects are anything but, I wonder if the bad effects were deliberate to try & increase the camp value even more. The Dinosaur effects range from embarrassing socks puppets to inanimate on set models that just sort of sit there to some horrible stop motion animation that is amongst the jerkiest & tatty I have seen. Some of the blue screen work is also incompetent. There's no real gore, a woman has her arm bitten but other than that forget it. There's a fair bit of nudity as a lot of the woman take their tops off at various points. Amateurishly made the whole production sucks, there's no excitement or sense of wonder or anything here & I don't care what anyone says there's no way that small rubber dinghy could have carried six men even if one of them hadn't been badly injured & lying down in it. Not wanting to spend any more than was necessary Dinosaur Island feature footage edited in from Carnosaur (1993) of the Dinosaurs, footage of the plane from Farewell to the King (1989) & long shots of the actual island are stolen from Terror in Paradise (1995).

Shot in just twelve days (why so long guy's?) in the often used Bronson Canyon in California as well as the late David Carradine's ranch the production values are rock bottom here with tatty costumes, sets, locations & props. The acting is bad, everyone got on my nerves although Ross Hagen as the tough Captain gives a surprisingly straight performance while all those around him are hamming it up.

Dinosaur Island is as cheap & nasty as they come, made by two of the worst director's ever to get behind a camera it was never going to be pretty. Poverty row comedy, nudie & monster film that really is as bad as it sounds.

Review by Paul Andrews (poolandrews@hotmail.com) from UK from the Internet Movie Database.