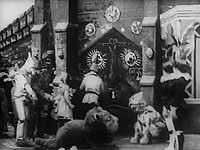 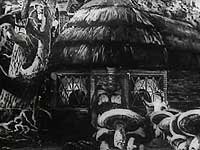 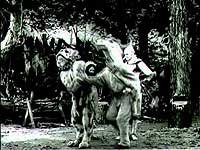 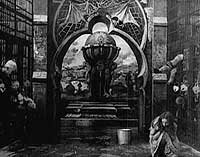 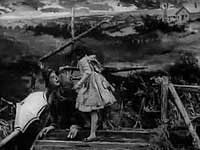 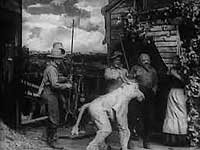 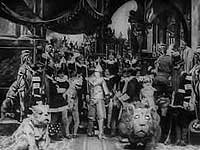 For the first 20 years of filmmaking, from about 1895 to about 1915, just before heading into the World War 1 era, our pioneering filmmakers were still stuck on stage plays and watching theater all the time. They were shooting a lot of their films, as if they were recordings of stage plays or theater acts. Most of this probably had to do with the stationary camera issue, no handheld or many different camera angles. That wouldn't start to change until the 1920s, although D.W. Griffith, Chaplin and some of those guys started going beyond the stationary camera look as early as 1914.

So, being 1910, this film isn't much different as those that came before it. It still looks like it was shot as a stage play, even though they use a lot of interesting backdrops, sets and some special effects. Still one camera with no movement. That's not a bad thing. It's just how it was at that point in film's evolution.

This version of Wizard of Oz is supposed to be even more loyal to the book, released in 1900, than what the famous 1939 MGM classic was. The only character that actually looks exactly like the 1939 one is Toto. Scarecrow and the Tin Woodsman look slightly different, but you can clearly tell it's them. Then the rest of the characters look a lot different, even Dorothy, than what you're used to. This film looks more like a George Melies' experimental film, until you realize it's a Oz film. It's not a technical thing or a recording-of-a-stage-play, thing. Just a weird, uninteresting plot that needed more reward then what it was selling.

Review by PCC0921 from the Internet Movie Database.