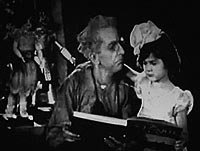 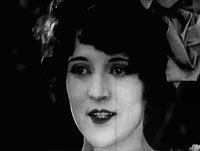 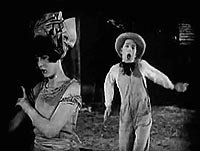 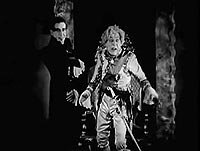 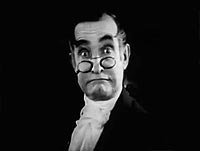 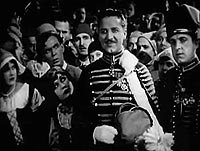 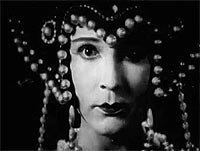 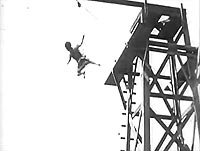 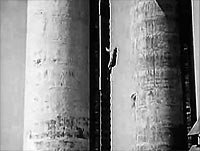 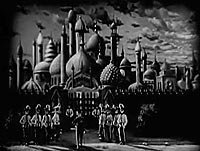 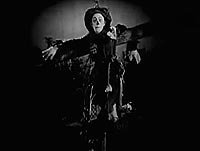 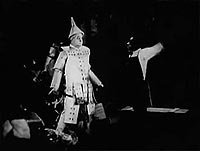 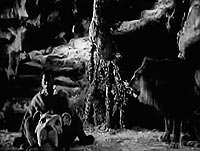 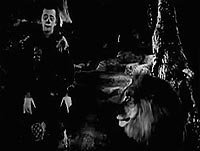 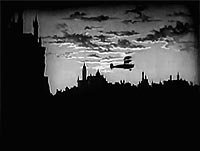 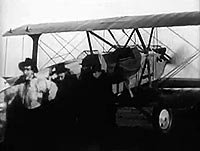 There were quite a few motion picture versions of L. Frank Baum's famous stories before 1939's "The Wizard of Oz." Four are lost. In 1910 there was "The Wonderful Wizard of Oz" (13 minutes). A few years later, Frank Baum himself produced three Wizard of Oz movies, the most notable being "His Majesty, the Scarecrow of Oz" (1914). It just might be the best version before 1939.

Larry Semon's "Wizard of Oz" (1925), produced six years after Baum's death, is dreadful. Now, to be fair, it should be stated that the production values are high, and the stunt work is excellent. But where is the fairy tale – or the heart – of what resembles Baum's Oz? There are no witches or Toto or magical fantasy. Rather, the film is a silent showpiece for comedic actor Larry Semon, who not only butchers the basic story-line, but morphs it into a bizarre tale that ultimately bankrupted him. Semon relied on slapstick, not on intelligent plot. And the characters are so inconsistent!! Did L. Frank Baum Jr. really co-write this beauty?

The movie commences with Semon, starring as an eerie-looking toymaker (in one of several roles), who is coaxed into reading the Wizard of Oz tale by his granddaughter. The pages of the book are turned, and we see the opening credits. Next we are in Oz, then Kansas. Dorothy (played by Dorothy Dwan) – Semon's new wife and a bit older than the Dorothy of the book – is constantly brutalized by her ill-tempered and corpulent Uncle Henry, although Aunt Em is nice. Later, Uncle Henry will suddenly and strangely become Dorothy's protector in the Land of Oz, before he again turns malicious before film's end. Anyhow, Dorothy, puzzled by Uncle Henry's behavior, complains to Auntie Em, who explains that Henry is not her real uncle. It seems that Dorothy was the rightful heir to the faraway throne of Oz, but as an infant she was sent away and left on Em and Henry's doorstep with a note stating that an attached secret letter should not be opened for 18 years. Then, Prince Kynd's position was usurped by a bad trio of Prime Minister Kruel, Ambassador Wikked, and "able aide" Lady Vishuss. As Dorothy is turning 18 years old, the letter is opened. It explains that she must return to claim her inheritance. Meanwhile Kruel sends Wikked and some henchmen in a biplane (!) to steal the letter before it is opened; they are unsuccessful. So why wasn't the letter originally destroyed by Kruel, before he had left baby Dorothy in Kansas? Anyway, a gigantic tornado carries Dorothy, Uncle Henry, and two farmhands to Oz. Lightning transports a third farmhand (Snowball) there too.

At the same time, the people of Oz – aroused from their 18-year slumber – are assembling before Kreul's throne, finally wondering what had happened to Princess Dorothy (!). Next we are told that the Wizard (Charles Murray) is just a fake who is commanded to do oddities to distract the unhappy populace. As a title card states, "The Wizard was just a medicine side-show hokum hustler, but he fitted in nicely as the Prime Minister's "yes-man." Then another title card reads, "Do your stuff, Wizzy!" So "Wizzy" produces from a large wicker the "Phantom of the Basket," an appalling transvestite whose dance mesmerizes the people, but not Prince Kynd. Afterward the Wizard turns good.

The three farmhands are played by Oliver N. Hardy, Semon, and Spencer Bell. Yep, that's the same Hardy who later teamed with Stan Laurel (1926) after the movie bankrupted Semon. Hardy, who is not as fat as he would later become, is "transformed" by the Wizard into the Tin Woodsman. But in a wacky twist, he turns bad for the rest of the movie! He becomes the new "Knight of the Garter," and continues to yearn for Dorothy (!!). Ugh! But then, Dorothy here is not so innocent, but quite mature. Hmmm. See, you were warned that this pseudo-Oz movie is bizarre! Hardy would meet his end when he falls from a tower. And yet he earlier survived a similar high fall on the Kansas farm! Semon would become the Wizard's Scarecrow in Oz, and also would court Dorothy, who is really destined for Prince Kynd. Obese Uncle Henry becomes "The Prince of Whales." Get it? By the way, Aunt Em vanishes after the tornado struck Kansas. As there was no explanation, she presumably died in the twister. After Price Kynd regains the throne, and Dorothy's situation is righted, one would think that – at the very least – he would throw dictator Kruel into jail. But he doesn't, as he has to sort things out. Hmmm. With the "investigation" protracted, Kruel regains some power, and Uncle Henry and Tin Woodsman Hardy become his henchmen. Later the defeated Kruel explains that he had to send baby Dorothy away, or else another court faction would have executed her. So there was still another court faction?

The third farmhand, Snowball (Spencer Bell), is a Negro who is superstitious and easily frightened, and likes watermelon (Hmmm). He is billed as G. Howe Black (one of his movie pseudonyms). Get it? And yet he later dons a lion suit (Cowardly Lion), and scares away the bad guys in the dungeon's torture room. Near the end Snowball becomes a hero of sorts as he flies a biplane (!!!) with Semon hanging onto a rope ladder. But it suddenly snaps, and Semon falls from a high elevation for the third time. Snowball may be the only "American" character to "escape" Oz! But then a Scarecrow doll inexplicably falls from a shelf, and the little granddaughter awakens from her dream. Yes, this is all truly weird, and there are still other things wrong with this "adaptation." See this disaster once to say you saw it, and then let it go. But it is so difficult to believe that this nonsense was put into film!

Review by romanorum1 from the Internet Movie Database.