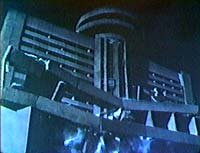 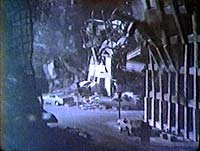 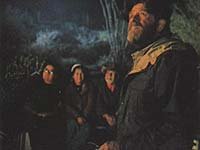 Before such films as METEOR, NIGHT OF THE COMET, Armageddon, or DEEP IMPACT (though after films like DELUGE or WHEN WORLDS COLLIDE), there was the 1978 made-for-TV sci-fidisaster movie A FIRE IN THE SKY, which depicted a collision between our planet and an interstellar visitor, specifically a meteor, an asteroid, or a comet.

In the case of A FIRE IN THE SKY, it's a comet that is not only pinpointed at Earth, but at one specific target: Phoenix, Arizona. And there's only one sharp-eyed astronomer (Richard Crenna) who believes and realizes that fact, while everyone else refuses to believe, or wants to cover it up. Of course, this latter plot line is a common one among most disaster films, whether for the big screen or the small screen: a sort of post-Watergate "Enemy Of The People" situation, one far different from the situations seen in METEOR or DEEP IMPACT, where joint operations to stop these potentially cataclysmic deep-space visitors are put into effect.

At the same time, however, A FIRE IN THE SKY, for all the flaws it shares with a lot of other disaster films made for the small screen, including some ripe overacting and dialogue that is a little bit too unintentionally humorous at times (even though the screenplay is based on a story by Paul Gallico, whose 1969 novel "The Poseidon Adventure" provided the basis for the classic 1972 disaster film of the same name), is boosted by some really effective matte work and special visual effects that one would not have ordinarily found in a made-for-TV film of the late 1970s. And it may as well be said that the director, Jerry Jameson, was known for being a specialist in this genre, with films like 1974's HURRICANE and TERROR ON THE 40TH FLOOR, as well as (for the big screen) 1977's AIRPORT '77.

Review by virek213 from the Internet Movie Database.