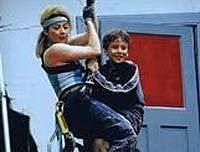 (The following may contains a few minor spoilers)

If I were to say that by the end of "Aftershock: Earthquake in New York" every problem in the picture will be solved, you would have no idea of how literal I was being. The production has so many independent characters, complicated situations, and internal and external conflicts, by the halfway point of the movie, I lost track of whose who, and what's happening and where to what characters. Most of the time it is a good thing to have a variety of characters, but "Aftershock: Earthquake in New York," pushes the audience over the edge.

"Aftershock: Earthquake in New York" details an earthquake that erupts in the big apple and the mayhem is causes for separate groups of devastated people. Actually, this production would be more reasonably called "Aftermath: The Horrors of an Earthquake When it Erupts in a Big City" because it is more about the situations encountered after the quake than the existent tremor itself. During the earthquake, we see museums break apart, skyscrapers collapse, streets crumble, a subway train wreak, a bathroom disassemble, and even get to see Lady Liberty fall flat on her face. All the special effects are well done and convincing. The movie does make us believe there is an earthquake is occurring.

The film wastes time during the first fifty minutes, sparring us the usual momentum build-up and developing the characters individually, so that we can to care about them when the disaster hits. Good attempt by the filmmakers. But their failure has already been decided. There are just to many characters and complex sub-plots to weave this unorganized, fragmented movie together. We meet Emily Lincoln (Cicely Tyson), a religious woman on her death bed while trying to teach a young, rebellious teenage boy lessons of life, Thomas Ahearn (Tom Skerritt), a family man having tiffs with the city mayor, Lincoln (Charles Dutton), who also has a family in danger. Then we are introduced to a defense attorney Evie Lincoln, (Lisa Nicole Carson), and her client charged with cold blooded murder. They get into a subway wreak (in a tunnel where the lights are still strongly working after a massive earthquake and countless other complications have occurred). A foreign cab driver named Nicholai Karvovsky (Fred Weller) is also involved with a young woman, I forget who and why. Also covered in "Aftershock: Earthquake in New York" are marital problems, legal issues, family crisis, financial necessities, political outbursts, and even medical disasters, all which are related to each other, but distract us from the main events the story centers on.

There are a few unconventional surprises contained in the story line, but for the most part, this is one long journey in circles. After the earthquake hits, we expect the movie to build up tension for an aftershock, thus the title "Aftershock." But we just don't get that at all here, but receive a rehearse in an event that took place just an hour earlier. It is like rewinding a video and watching the same scene twice. The actual disaster itself couldn't help but recycling elements from past motion pictures such as "Volcano," "Asteroid," and "Daylight."

The picture is directed by Mikael Salomon, whose previous work includes the also mediocre "Hard Rain" (1998) and " A Far Off Place" (1993). Analyzing his past movies, I think Salomon has a tendency to cover a lot of material on screen, but the material doesn't have much of an impact on an audience. In "Aftershock: Earthquake in New York" just about everything happens except someone answering the question of why there would be a major tremor in the big apple in the first place.

Review by Blake French from the Internet Movie Database.