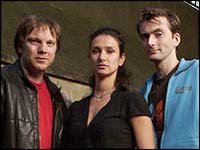 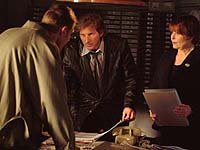 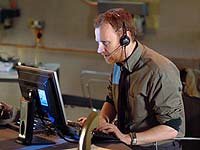 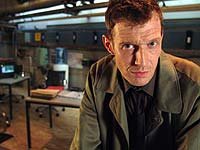 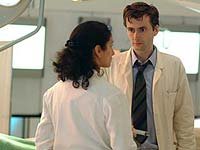 Nigel Kneale's 1953 serial The Quatermass Experiment has long had a reputation as one of the seminal works of British science fiction. Yet it is by and large missing from the BBC archives and, outside of the published script from it and the subsequent film remake by Hammer that took some liberties in its adaptation, has been impossible to view again. Yet in 2005, more than fifty years after its original broadcast it was once again re-staged in front of cameras to be broadcast live by the BBC. How did this remake of it fair and did it do justice to its source material?

The performances are certainly interesting. Jason Flemyng's Professor Quatermass seems quite close to Kneale's original conception of the British Experimental Rocket Group's leader: a determined scientist yet also a thoughtful man who looks on with horror at what the mission he launched has unleashed upon the Earth. Flemyng brings all of those elements across well and his performance in the closing minutes of the production, where he brings to life two vital but lost scenes from the original production makes the entire viewing experience worthwhile. Other times though, Flemyng's performance feels rather rushed as he throws lines out in a hurry (one scene partway in where Quatermass is arguing with Lomax and Blaker is a good example) and he's lumbered with a costume that doesn't quite seem to fit the character. Overall though Flemyng does a good job and his Quatermass is certainly memorable.

There's a decent supporting cast as well. A pre-Doctor Who David Tennant does particularly well in the role of Doctor Gordon Briscoe while Mark Gatiss believably plays the increasingly disillusioned scientist Paterson despite his role being largely truncated. Adrian Dunbar's Ministry Of Defence investigator Lomax and Isla Blair as Home Secretary Margaret Blaker comes across well as officials caught up in events beyond their control and trying to deal with it to the best of their abilities. Perhaps a bit less successful are Indira Varma as Judith Carroon and Andrew Tiernan as her husband Victor with both being more melodramatic than anything else though Tiernan does well in the second half where his appearances are more limited. Perhaps the weakest of the main cast though is Adrian Bower as James Fullalove who, partly because of the script and partly because of his performance, comes across as a parody of the 1950s reporter type that seems a bit out of place with the rest of the production. The results then are interesting and good but far from perfect.

The script effectively condenses the approximately three hour original TV version into a little more than half of its running time. Despite that, it's far more faithful to the original than the Hammer film was. The opening and closing minutes of this version in particular neatly condense the respective episodes of the original version. As a result, some of the best moments of the original version that have been lost (such as the very conclusion to the story) are presented on screen at last. That isn't to say it's perfect however as the condensing means that characters, subplots and some scenes seem to randomly drop in and out of the film (such as Gatiss' Paterson for example). In other cases, the original 1950s dialogue seems out of place (such as some of the dialogue from the scene with the Matthews' couple) which isn't in turn helped by the fact that the sets and costumes are a really odd mixing of the 1950s with the 2000s, as if the production team couldn't decide which way to go. Overall though, the script does an admirable job of condensing and presenting Kneale's original, if with some hiccups.

Perhaps the biggest problem of the production lies in how it was made. While the idea of broadcasting this live seems a good idea, especially given that was how the original went out, in retrospect it served to do little more than hamper the production. Performances can seem rather hurried while lines being drowned out as well as the occasional fluffed line doesn't help matters either. That isn't the big problem though.

By doing it live, the whole production feels largely static. For much of its length, the film seems confined to a couple of rooms and even then the number of shots seems limited. When the camera does finally become mobile from time to time, the results are often shaky with a feeling more akin to amateur video than a polished production. Nowhere are the faults perhaps more apparent than in the final scene when the lack of a creature means that the whole scene is effectively just Flemyng acting in a pool of light to an empty room. While doing the film live certainly captures the almost theater like feel of the original's era, it does make the production drag and frankly does it no favors.

Ultimately then, this 2005 remake of The Quatermass Experiment is itself an interesting experiment. There's some good performances and some strong moments in it but its a production hampered by and large by its live format and sometimes uneven mixing of past and present. One can't help but wish that it had been done as a filmed production when some of its larger issues could have been sorted out but, baring that, it's an admirable attempt to re-stage one of the lost classics of British television.