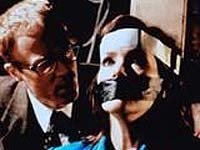 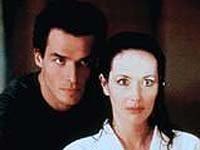 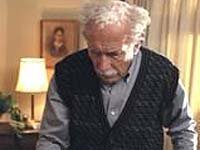 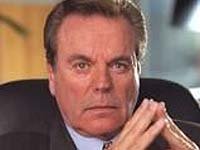 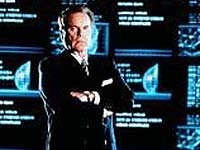 Even though this movie is crap of the highest order, it actually has some pretty good production values. The actors are attractive, and reasonably talented. There aren't a bunch of clowns running around blasting away, expending hundreds of rounds, but never hitting flesh. Nor are there wild car chases/crashes where thousands of dollars worth of beautiful machines are uselessly trashed.

The interiors look respectably modern, architecturally, and the equipment looks up to snuff. Well, there is that high tech computer room furnished with what look like leftovers from a '50s electronics lab. And the pancake make-up on the corpses cracked me up. Not pancake make-up in the conventional sense, but what looks like dried pancake batter slathered over their exposed skin. This is supposed to support the idea that the bodies have calcified -- though how the virus would accomplish this transmutation is an exercise left for the student (viewer).

Ah yes, the virus. I would like to tell you that this is not the absolute worst premise for a sci-fi, horror flick I know of, but I can't. A computer virus that is transmitted via a television (or computer monitor) screen and becomes a lethal biological pathogen? Gimme a break. Warp drives a la "Star Trek" are one thing, but photons becoming viruses? This is so silly the desired "fright factor" just isn't realizable. The flick could have used one of those awful dream sequences where the dead come alive, or have a cat jump out of the closet, or something, because the viral thingamajig isn't doing it.

Review by Ray Humphries from the Internet Movie Database.