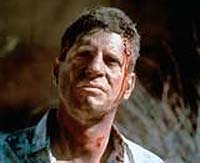 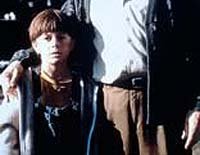 This NBC big event basically blew TV big events off the airwaves with its ambitious but silly premise of an often done disaster theme, poorly plotted and ridiculed for its false facts. For my first viewing of this, having wisely skipped it back in '97, I'm enjoying it for how it basically shows a society of morons through the science community, in law enforcement, through the military and in society in general. To get this off the ground with excitement immediately, the storytellers hit the earth with a series of smaller meteors right off showing their fiery power. So far, so good, and truly frightening. But by the time of the first commercial break, this switches to unintentional comedy, and it becomes a delightfully funny view of how an entire city (in this case Kansas City) reacts to an evacuation due to the potential media strike.

At the head of this action is Michael Biehn as a FEMA official, delightfully telling off the press for wasting his time. Crowds in public spots scream in panic more than 40 hours before the hit and officials argue over how to deal with it. A strike on the Hoover dam creates a major flood and this creates chaos on city streets and bridges nearby. The meteor, having broken up into smaller but still deadly pieces, now seems to have a larger target than that truly up to date city that's gone about as far as they can go.

At least this has not stunt cast the president of the United States, someone named Denis Arndt playing that minor part. But the cast, playing it totally straight, at times begins to emulate an AbramsZucker movie, making me wish that Leslie Nielsen had been cast in that part. The special effects rank from really good (the flood scenes) to the insipid (the meteors themselves look like painted packing popcorn traveling through space) so there's a little bit to admire and a lot to laugh at.

So since this barely ranks above one of those straight to video Asylum films that we've been plagued with since around the time this came out, it is hardly a disaster classic, if not completely unwatchable. This was obviously meant to grab advertising dollars with other disaster blockbusters of the same time much anticipated, but someone on the writing team should have at least done some scientific research.