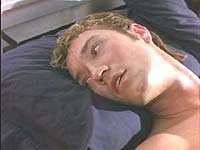 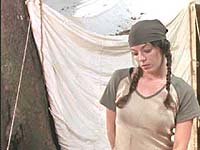 During the opening credits we find out this is a "Dirty Martini" production. Early in the film, the man who finances the expedition drinks dirty martinis made by a topless pool girl. Coincidence? I think not. Dr. Brinson Thomas (Pete Penuel) assembles a crack team of young co-eds that work cheaply, to find a missing tribe in the Everglades, most likely connected to the thing we did not see that killed two people before the credits. Hopefully these girls like to take showers because they can't act

Brian Minyard plays Wilson Friels, a bad actor who is made to look sinister with a goatee. He is financing the expedition, plans on going along, and has an undisclosed ulterior motive. During the first night camping, Friels tells the legendary story about the lost tribe and the creature. They discover the ransacked camp and human remains. They want to leave the island, but the boat won't be back for a few days. No sense packing a radio. The creature appears to be manufactured from the same high-tech polymer NASA uses in their space shuttle tires.

Review by nogodnomasters from the Internet Movie Database.