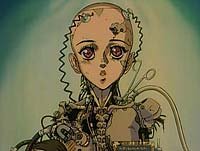 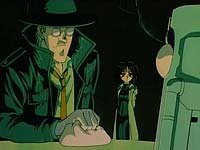 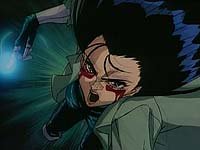 Born of flesh and metal, Gally is not your average girl. Then again, in a world of ruthless spine thieves and iller cyborg gladiators, you have to be something more than average. You have to be the best; especially if you work as a bounty hunter.

As a brilliant scientist and part time bounty hunter, the City of Junk is a place of great loneliness for Yugo. While making his way through the city at night, he comes across the body of a lifeless Gally. Using his genius, and a few spare parts, Dr. Yugo is able to revive the young girl, and the two quickly form a lasting friendship. In time, Gally grows stronger and realizes she harnesses immense power, which she decides should be best used by following Yugo's path as a bounty hunter. Yugo is at first extremely upset with Gally's plan, but after seeing her make short work of a mechanically enhanced thug, he realizes that Gally may be the best hunter he has ever seen. Yet even tougher than the gladiator droids Gally must defeat, is the choice she must make to uphold justice and preserve the law, or turn a blind eye, and look up to the City of Clouds for a dream of something better.

Packed with action and overloading with imagination, Battle Angel is a treat for any animation fan looking for something a little more adult than Dragon Ball Z. The voice over work for the North American version is done impeccably well, with the voice talent really giving the characters the emotion and feeling they deserve. This is especially apparent with Yugo and Gally, two characters that really need that depth, as their emotions are constantly changing.

Battle Angel director Hiroshi Fukutomi is no stranger to Japanimation, and makes it very obvious with this top-notch action film. He meticulously blends reality and emotion with fantasy and imagination. Fukutomi allows his viewer to feel what it is like to live in the harsh conditions of the City of Junk, yet at the same time we are able to dream along with the characters as they attempt to make a better future for themselves, in the beautiful Cloud City. Backing Fukutomi in creating this groundbreaking film are some of the most talented artists to ever put pencil to paper. Not only do the characters show exquisite detail, but some of the city shots are unparalleled even by today's standards. Battle Angle writer, Akinori Endo, is a main piece of this complex puzzle, as it is he who has breathed life into the Battle Angel world, making it one of the most exciting and fast paced films to ever see distribution.

I need say only one thing, not only to animation lovers, but also to film lovers in general who need a guardian from boredom, unoriginality, poor dialogue or any other demons the film world has to conjure, and that is to think about getting an angel as your guardian and making that guardian, Battle Angel.

Review by JohnnyPhoenix from the Internet Movie Database.