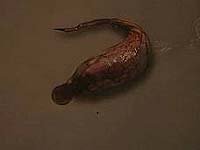 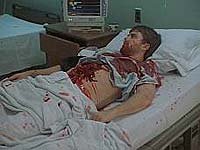 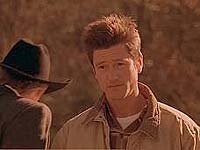 In Larva, Vincent Ventresca plays the role of Eli, a Veterinarian who finds some intestinal worms that are mutating in the cattle of the ranches in Host County (play on words). Host County is run by the sinister owner of Host Meats, who is the only Meat Buyer in the county, the main employer of everyone in town, and pays the ranchers low prices for the meat. He also gives them free feed and Veterinarian services. The Town Sheriff is the Owner's personal bodyguard.

The previous Veterinarian, Felix, was employed by Host Meats. Eli (Ventresca) just shows up but Host Meats did not hire him. How did he know the job was available? Eli has no clients except for John Forsythe, the "Angry Rancher" who has always suspected Host Meats was using illegal drugs on the herds of cattle. John Forsythe as the Rancher takes his role and plays it straight. Forsythe is a very good actor, especially in bad movies like this one.

Ventresca soon sets up a Town Meeting where he reveals that he found something, but he does not know what it is, he has no idea what it can do, and he is not sure what caused it, but he wants to quarantine all the cattle. Not surprisingly, the few ranchers that show up are not impressed. Rachel Hunter plays the sullen attorney for Host Meats. Hunter reveals that Eli has had his Veterinarian's Medical License pulled in two other states and is a quack.

The best thing about Larva is that non-CGI special effects are used on a couple of the scenes that feature the Larva bursting out of someone. The Larva is supposed to be an intestinal worm, yet the steroids in the Feed make it grow into some kind of bat-crab. Once it is inside of a human, it takes a day or two to grow, but once it pops out it grows from about the size of a rat to about the size of a chimpanzee in minutes. Beyond incredible, it is another case of cheap Sci-Fi Channel Special Effects. Like usual with most Sci-Fi Channel movies, the creatures are Dark fuzzy CGI.

Several inconsistencies with the story are that A)The Larva attack a Host Meats employee who falls into a stream at the Public Park. Why would intestinal worms go into the streams and how could they survive in the water too? B)Since the worms could now live in freshwater, then presumably they could spread all over the state and the USA. Why did the worms stay small sized when they were in the water, and yet the ones that were living in the trees were the size of chimps? If the writer had done some research into steroids and intestinal worms, maybe Ventresca (the Vet) could have at least had some kind of "Scientific Theory" and it would have made the story seem less ridiculous. C)Why would worms mutate into giant Bat-Crabs? I had expected to see some mutated worms, but why flying bat-crabs? D)Even though the feed and the injections into the cattle were very obviously a reference to steroids, the word steroids is never mentioned. Since steroids are a generic word and the issue has been very prominent in the Olympics and Baseball news, the Larva story would have seemed more realistic and intelligent if steroids had been openly discussed and debated. E) The editing was bad. When Forsythe and Ventresca kill a gigantic Bat-Crab at the hospital, they just walk away. Another couple of times when the Bat-Crabs are killed, the actors basically stop and move away. Apparently the Director was afraid that having the actors inspect the Creatures would make the CGI harder to place into the scenes. Any good Sci-Fi movie would have had them dissect at least one Bat-Crab and bag it and then send it to the "University Lab" or Center for Disease Control (CDC). Another odd touch is that all the human victims are just left laying around. Nobody ever inspects them to see if they were impregnated with Larva. It would have made sense that once the big Bat-Crabs attacked people, that they would impregnate them with more Larva. Instead, the Bat-Crabs just seem to bite them. Why are the Bat-Crabs biting the humans? Do they drink the human blood and/or eat the meat? Ventresa (the Vet) never checks to see what is being done to the human victims of the adult Bat-Crabs. He just steps over the dead bodies. Then there is the lady in the car (rip-off of the scene from 1982's The Blob) who's bra keeps going on and off in the car.

The end of the movie is as bad as the rest of it. There are hundreds of bat-crabs hopping around on the trees, and eating the town folks. So the team of Forsythe, Ventresca, Hunter (she switches sides when she sees a Bat-Crab explode out of the Host Meats employee who fell into the stream), and the town Sheriff (he switches sides too when his deputy turns into a Bat-Crab Burger) decide that the Bat-Crabs are attracted to nitrates such as are found in fertilizer. They drive the Fertilizer Truck down the town's main road, with the pump open dropping fertilizer all over the road. They figure that all of the Bat-Crabs will follow the truck to the town's concrete bomb shelter (or was it a sewer?). The Bat-Crabs presumably all follow, and the team is dropping C-4 and dynamite all over the place so they can blow up all the monsters and save what is left of the town. The plan works thanks to the very unreal CGI explosion effects. The Bat-Crabs presumably all blew up, but what about the ones that were incubating in the people and animals of the town?

Review by peace63 from the Internet Movie Database.