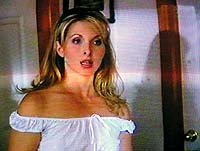 Attempting to reunite after several years, Steve, (Chris Hoffman) asks old friends Amanda, (Maggie Grace) Coral, (Betty Okino) Lance, (Cory Hardrict) Rachel, (Ella Bowman) Sean, (John Keyser) and his girlfriend Ally, (Kristin Herold) together for a search of his missing brother up in a cabin in the mountains. When they start getting killed off one-by-one, they find a vicious creature stalking them. Trying to make it through the night with the help of a weapons-expert scientist, Kat, (Chase Masterson) who helps them to escape, they eventually discover a secret about the creature that none of them could've imagined.

The Good News: In the realm of creature features, there's a lot worse than this one, and it turns out halfway decent. The gore in here is one of the best features, which is pretty over-the-top and is still a giant blood-fest. There's a very brutal head caved in, a couple had chunks bitten out of their throats, a lead pipe is impaled in the stomach, and the biggest one is a series of scratches on the chest followed by a brutal decapitation by ripping the head clean off. With none of this being done by CGI and instead made with real effects, it makes it much more believable and that much more effective. The nice fact was that the creature was instead made by an actual costume rather than a fully CGI creation, which renders it that much more believable and gives it a much more credible screen appearance. Making it more credible looking also makes it that much more effective in getting the scares it needs to give a threat on-screen. This one works. The fact that the film is also pretty rapid with it's plot is another good sign, giving it some rather decent action sequences in a rather confined time, giving it a much more rapid pace than it should be. This wasn't all that bad.

The Bad News: As decent as it is, there is still some things wrong with the film. Even though the creature is for once a person in a costume, it still looks really bad. There's really no fear anywhere in the creature design, and that is mostly due to it's eyes. There really odd, and make the creature appear to be more curious and sad than angry, which is a huge detriment to the film. It takes a lot out of the film if the main threat isn't that scary. It's all so cliché driven as well that there's really nothing new to be seen here. All it's so-called twists are not really new at all, which can make it a bit of a struggle to get through it. The action scenes are edited so fast together that it's virtually impossible to figure out what's going on during the sequences. There's not a whole lot else to this.

The Final Verdict: Far from terrible, but this still has some big problems with it. This is really scraping close to the bottom of the creature feature pool, so only those that high a real high tolerance for these kinds of movies or find it interesting. For those with more discerning creature feature tastes, then take caution with this one.