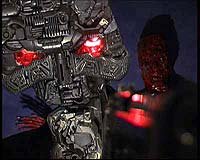 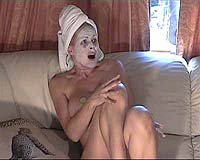 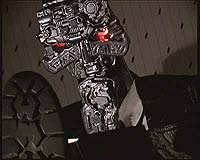 "Exterminator City" must be a joke. I can't believe anybody would make this and think it should be taken even remotely seriously. There are two separate movies going on here. The real "Exterminator City" is a robot puppet show. A robot has gone insane and has to kill all of the large breasted women he can find. This leads to the second "Exterminator City" movie. There are many scenes of topless women lounging around their apartment and then getting killed by the robot. Here's the joke: The two movies never meet! The topless chicks never see a robot puppet and the puppets don't see the ladies! Well, the ladies pretend to see a deranged robot attacking them but they never do. It all leads to a lot of unconvincing screaming and bad acting as they giggle and smile their way through their death scenes.

If there's one thing you can say about "Exterminator City", it's that it's consistent. Every couple of scenes repeat themselves in an endless loop of robots talking, topless woman hanging out, insane robot enters room and then kills woman. "Exterminator City" feels like it was made to show off the puppets and the naked women scenes were tacked on later. You have to give the movie some credit for dragging all of these women into their puppet show. Julie Strain shows up as does Brinke Stevens. Strain goes topless but Stevens does not. I can't believe the robot would even bother killing a clothed woman. That's out of character for him. The last robot victim is a huge breasted mistress with a whip. I didn't catch her name but she was probably the right sized lady to end this flick.

"Exterminator City" is a uniquely terrible movie. It's cheap and ridiculous but it holds fast to its conviction that puppets and topless women go well together. After the fifth or sixth naked woman got killed, I found myself drifting in and out of this movie. However, it may be worth checking out just to see how many naked women they can stuff into one crazed robot movie.

Review by Dr. Gore from the Internet Movie Database.