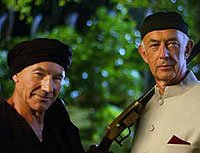 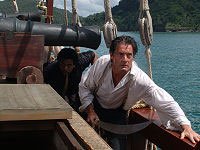 Being a big fan of the original 1961 version of "Mysterious Island," I HAD to see this 2005 TV remake. Despite the somewhat lackluster reviews, a few things perked my interest, like Patrick Stewart (aka Star Trek's Captain Picard) as Captain Nemo, Gabrielle Anwar and the long runtime of 170 minutes, just ten minutes shy of 3 hours (!). What compelled me to seek out this DVD more than anything is the simple fact that I'm a sucker for lost-in-the-wilderness type adventures.

THE PLOT: A handful of people, including a nurse and her daughter, escape in a balloon from a Confederate prison in Virginia. Storm winds ludicrously take them West into the South Pacific where they land on an uncharted island. There they discover numerous huge animals and two men living as recluses, the master being the mad genius Captain Nemo, who hates war so much he's trying to invent the atomic bomb in order to stop it altogether. Add to this mix a ship of pirates seeking a chest of treasure hidden somewhere on the island.

Despite the film's full title "Jules Verne's Mysterious Island," the story is based on the 1961 movie rather than Jules Verne's book. All the elements of the 1961 version are here with a few notable changes: The story is switched around so that Captain Nemo is revealed right away rather than near the end and the castaways don't search the island and make their home in the cliff until the second half of the story. Also, there are way more gigantic creatures -- a mantis, rat, scorpion, ant, eagle, spiders, octopus, etc.

WHAT WORKS: The Thailand locations are incredibly scenic; the cast is decent -- characters you don't like at the beginning you'll probably start liking by the end; the score is excellent throughout; the story maintains a vibe of realism despite the absurdities (for instance, it's never goofy or campy like, say, "Pirates of the Caribbean"); the CGI special effects for the various creatures are pretty good; the pirates look & act like real pirates (the captain is particularly impressive) with a good mix of races and an accurate Eastern-styled ship; and the second half of the story is much more captivating than the first half (so if you're bored with the first half, stick around -- it gets better).

During the first half of the story you'll note a growing attraction between the castaway leader (Kyle MacLachlan) and Gabrielle Anwar's character. In the second half, this culminates in a seriously passionate kiss. I'm usually not into kissing scenes, but this is one smoking hot kiss!! If you think the greatest cinematic kiss is in "Jerry McGuire" or "The Whole Wide World" (which indeed have famous kiss scenes), check this out.

After hearing the criticism leveled at the black castaway Neb (Omar Gooding), I was prepared for the worst. Upon seeing the film, however, I don't get the beef. Not one bit. Neb, as portrayed, is far from an "1860's gansta rapper with an attitude." When they first land on the island he shows a bit of angst toward the unlikable character Pencroff in response to the criticism, "You're just a slave anyway." Neb rightly responds that they're far from the Confederacy and slavery doesn't exist on deserted islands. Isn't it realistic that Neb would revel in a new-found sense of freedom now that he's far from the social constrictions of the Confederacy and America in general? Besides, his "attitude" is short-lived. He's actually a likable character as the rest of the film bears out. Interestingly, even though Pencroff is an irritating weasel throughout most of the story he redeems himself near the end and even reveals his love and respect for Neb (and vice versa). I wasn't expecting this.

WHAT DOESN'T WORK: Captain Nemo isn't remotely likable here -- he's basically just a grumpy recluse who happens to be brilliant; there are probably TOO MANY monsters -- sometimes less is more; the explanation for the numerous large creatures is lame (why didn't they just chalk it up to Nemo's experiments like the original film?); I found it hard to believe that the handful of male castaways could prevail against an entire ship of pirates during the on-board battle in the second half (but this is larger-than-life fantasy, right? And the fight is thrilling); and the CGI effects at the very end depicting lava and an erupting volcano aren't very impressive (although they get the job done).

One of the highlights of the original film was cutie Beth Rogan and her skimpy cavegirl outfit. Unfortunately neither female cast member in this remake dons such an outfit. I suppose it's more realistic, of course. Anyway, Danielle Calvert certainly possesses a undeniable cuteness as Helen, but Beth Rogan blows her out of the water.

FINAL ANALYSIS: The critics are a bit too hard on this 2005 remake. It's a respectable TV updating of the story. If you love awe-inspiring island locations, a great score, island adventure, gigantic creatures, convincing pirates, lost treasure, Captain Nemo and insightful moralizing about the evils of war, you'll want to catch this remake. The original 1961 version is a nigh-masterpiece and I admit that I can't say that about this version. It's somewhat flawed and doesn't have the mystery-build-up of the original, but it has numerous positive aspects the first one lacks, and it'll likely grow on me in years to come.

This is a must if you appreciate adventurefantasy films like the original 1961 version, Sinbad, Conan, Jurassic Park and Pirates of the Caribbean (not that I'm a big fan of the latter two franchises, but this newer version of "Mysterious Isand" is strongly reminiscent of those films in certain areas).

Review by Wuchak from the Internet Movie Database.