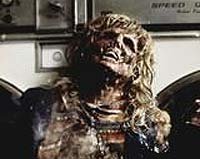 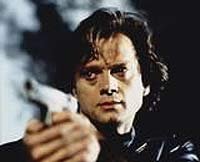 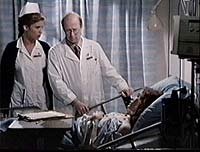 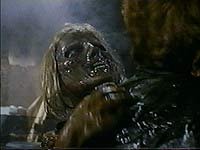 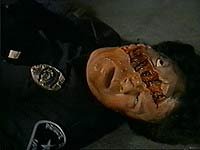 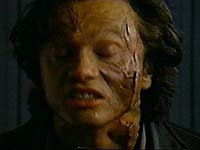 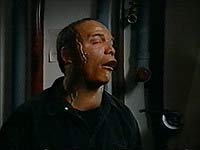 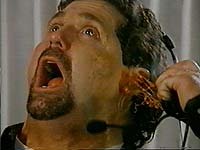 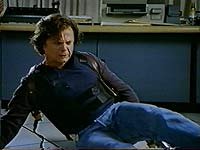 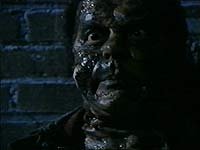 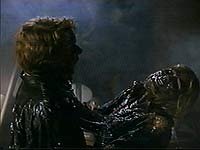 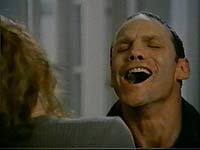 Scanner Cop II like the original features scanner Samuel Staziak (Daniel Quinn) who has now made detective in the L.A.P.D. Samuel is currently trying to locate his natural birth Mother & enlists the help of Carrie Goodart (Khrystyne Haje) who happens to be a scanner herself & runs the 'Trans Neurol Research Center', an organisation set up to help scanners such as themselves. Samuel now takes a special form of Ephemerol which lets him have all the advantageous abilities associated with being a scanner without any of the negative side effects. Samuel often puts his scanner ability to good use in the fight against crime in Los Angeles but Samuel's past returns to haunt him. A powerful, & mad, scanner named Karl Volkin (Patrick Kilpatrick) is out for revenge after Samuel put him away in a bust that ended up with Karl's Brother being shot dead. Karl has developed a way to absorb other scanners power & life-force thus increasing his, in a fight to the death Samuel must face the most dangerous adversary he ever has...

Directed by Steve Barnett, who also is credited as post-production supervisor, this is the second & to date last Scanner Cop film which in itself was a spin-off from David Cronenberg's Scanners (1981), a film which I personally can't get on with at all despite it's good reputation. In a series of just two films there is a 5050 chance that Scanner Cop II will be better than it's predecessor Scanner Cop (1994) right? Well unfortunately even with those odds it isn't, although having said that it's not too far behind it & it's still a fairly decent way to pass 90 odd minutes. The script by Mark Sevi moves along at a nice enough pace but feels very similar to the original. Also like the original Scanner Cop II is as much a police thriller as horror & the decision to take Samuel out of uniform & into plain clothes as a detective was a bad one in my opinion, this is just another cop in a leather jacket running around lifted straight from any number of 80's & 90's low budget action films. The uniform gave Samuel a certain vulnerability & distinctiveness which is missing here as he uses his powers to sort situations out like freeing hostages & in the process defusing a bomb by simply staring at it. In the original Samuel had conflicts with himself & was a well developed character with more depth than usual but in this he is just your average 'save-the-day' action hero with a bad hair cut.

Director Barnett takes over from Pierre David who acts as producer here, he directs with competence but Scanner Cop II has no real style to it. The special make-up effects could have been better & the gore is somewhat restrained, there are some splitting, bubbling, pulsating skin effects & melted bodies but little else except for the obligatory head explosion which you have to wait until the last five minutes to see & frankly it isn't worth the wait & doesn't even come close to the fabulous exploding head from Cronenberg's original.

With a very healthy sounding budget of about $4,000,000 Scanner Cop II should look a hell of a lot better than it does, I mean 4 big ones is a lot of cash for a film such as this, I really can't see where the money went. No major stars, no big action scenes, very limited special effects & only one split second head explosion? You tell me where the money went. The acting was OK & Kilpatrick has a certain intensity & makes for a good villain (am I the only one who thinks he looks like Michael Ironside?) but Quinn definitely isn't all guns blazing action hero material.

Scanner Cop II is a decent enough way to pass 90 odd minutes but just don't expect any kind of classic, worth a watch especially if you enjoyed the original.