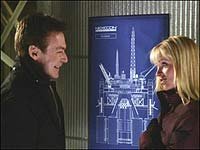 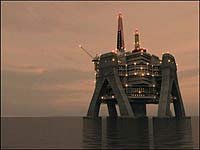 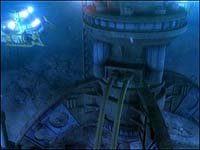 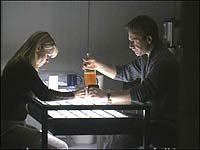 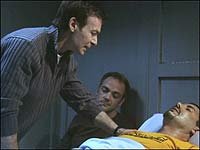 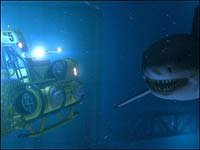 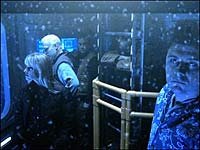 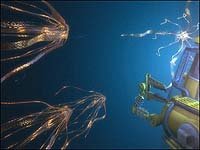 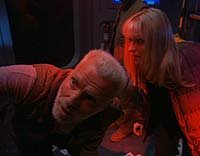 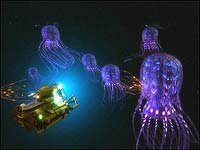 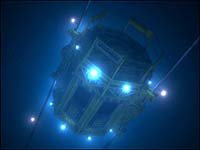 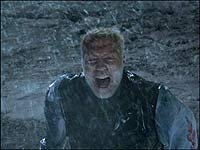 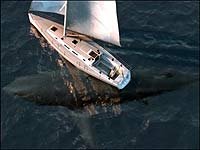 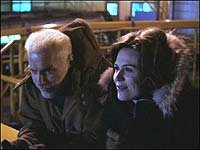 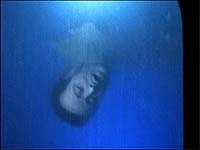 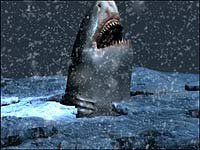 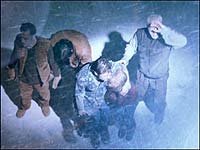 So far, all attempts to make the extinct Megalodon into the next big monster (a la T-Rex from "Jurassic Park" or Bruce from "Jaws") have failed miserably. Steve Alten's bestseller "Meg" was followed up by an incredibly lame sequel. "Shark Attack III: Megalodon" was horrible, despite the Tom Cruise lookalike. There was a German effort a couple of years ago and the only bad thing that didn't appear in it was David Hasselhoff.

Of the efforts, "Megalodon" succeeds the most and that's stretching it. The premise, of course, follows the typical cliché of a small group of people inexplicably trapped in a confined area by a monster. It worked okay for "Deep Blue Sea" but not so much here. This time, oil rig workers and a TV crew accidentally unleash heretofore extinct fish from an underwater cavern.

What made "Deep Blue Sea" so good was the superior acting of Saffron Burrows, Samuel L. Jackson, Thomas Jane and Stellan Skaarsgard. We don't get much good acting in this film. Female lead Leighanne Littrell's only claim to fame is being married to Brian Littrell of the Backstreet Boys. Her acting is strictly two-dimensional and straight-out throwaway (if her role had suddenly been erased at the last moment, no one would have noticed because her character wasn't made essential to the movie's plot).

Anyway, reporter Christen Giddings (Littrell) and her dorky cameraman Jake (Fred Belford) go to the world's largest oil rig up in the Arctic (or someplace close enough to surround the rig with ice floes). There, we meet the rig owner Pete Brazier (Robin Sachs) and few of his workers (played by Mark Sheppard, Al Sapienza and Jennifer Sommerfield, to name a few).

The drill head penetrates an underwater cavern at 5000 feet, unleashing prehistoric fish and, eventually, a megalodon.

The only real acting is done by Sachs (best known for being Ethan Rayne on "Buffy, the Vampire Slayer" and for hosting "Box Office America" on PBS for the last 10 years) and Sapienza (Philly Falzone on "Prison Break" and Mikey Palmice on "The Sopranos"). For some reason, Sommerfield gets the infamous "and" tag on her name in the credits, like she's a special guest star, although her resume shows nothing but one-time guest shots on TV shows. Whatever the case, she doesn't live up to the billing. Mostly, she goes to pieces and starts crying.

There is little in the way of thrills. The only real one is when the workers pull a prehistoric fish out of a suction hose and it attacks a rig worker a la "Leviathan." The creature effect of the fish is great (not CGI) and the fish really looks frightening. Alas, the worker who was attacked is sent off-screen a few minutes later for medical treatment and that storyline is lost.

Other mini plots are revealed and discarded. Sachs tells rig workers about an underwater methane leak and shows a glowing red spot in the sea near the rig. After that, we never hear of the methane leak again and the glow disappears. When the cavern opens, hundreds of prehistoric fish escape and very little is said about them or what kind of havoc they might be wreaking (I could imagine the producers already prepping a sequel). The other rig workers disappear after one scene and, save for a disembodied voice, are never heard from again.

Just like in "Jurassic Park," "Deep Blue Sea" and other copycats, a bad storm comes along so that the Coast Guard can't show up to save the day. The attempt to create a claustrophobic atmosphere fails glaringly.

The underwater scenes are CGI and they look very believable. There is a fantastic shot of the cavern, filled with luminescent fish. But, even CGI has its limits and you'll see that when the megalodon appears and attacks.

The shark attacks with all the aplomb of a bored movie star. Only one guy is eaten and that looks so fake I had no real desire to hit the rewind button. The shark attacks on the mini-subs are not convincing (indeed, the actors inside act more like they're getting ready to ride "Pirates of the Caribbean" at Disneyworld than they do reacting to being attacked by a 70-foot shark).

By the way, the movie is 91 minutes long. But, the shark scenes occur in the last 30 minutes. The shark attacks actually occur in the last 20 minutes, far too late to make this movie as good as it could have been.

I won't say who lives and who dies, but I will say the ending flat out sucked. A speech about environmentalism near the end comes out of nowhere.

The movie was directed by Pat Corbitt. You'll also notice that his company does the digital effects. At first, you might think he's a director who happens to own a CGI company. By the end of the film, you'll realize Pitts is a man with a CGI company who thought he could direct a movie.

It's not a terrible film. It's just lackluster and average, with a lot of wasted potential.

Review by pv71989-2 from the Internet Movie Database.