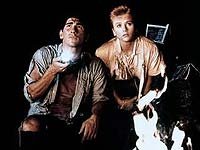 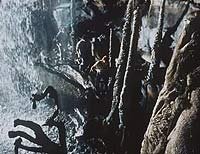 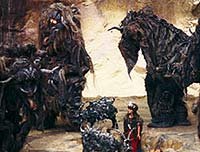 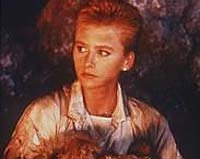 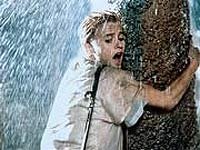 Fans of Jules Verne's timeless adventure story should take heed of early signs of impending danger in this train-wreck of a movie and immediately turn back: Journey To The Center Of The Earth '88 is extremely tough going and many pitfalls lie in wait.

The first indication that this is going to be a disastrous expedition into the unknown comes with the introduction of the film's heroine, British nanny Crystina (Nicola Cowper), an unappealing, androgynous looking young woman with a very nasty haircut. Things get worse when Crystina takes a job in Hawaii, looking after a dog for wild rock singer Billy Foul (Jeremy Crutchley), and her path crosses with two irritating, American teenage boys, Richard (Paul Carafotes) and Bryan (Ilan Mitchell-Smith), and their younger sister Sara (Jackie Bernstein). By now, it's perfectly clear that this film bears little resemblance to Verne's novel.

When the kids go exploring volcanic caves on the island, with Crystina following (having had her dog basket put in the back of their jeep by mistake), the group find themselves plunged into a subterranean world where they discover Atlantis, home to a Brazil-style dystopian society of bizarre 80s punk-styled characters.

This charmless mess of a movie was started by writerdirector Rusty Lemorande, but when Cannon films refused to cough up the cash for his intended special effects, the film was eventually completed by tacking on material shot by B-movie legend Albert Pyun, whose abysmal Atlantis based footage ostensibly serves as a sequel to his earlier movie Alien From L.A. (which was also loosely based on Verne's classic).

The diabolical, incoherent narrative, cheap sets (complete with polystyrene rocks), and wooden performances from Cowper and Mitchell-Smith make the whole sorry affair difficult to endure. After much aimless Atlantis-based action in which the youngsters (minus Richard, who mysteriously vanishes) try to avoid capture by the villainous General Rykov (Janie du Plessis), who plans to invade the Earth's surface, the film ends abruptly with a completely pointless montage of earlier scenes set to a crappy 80s poprock tune.