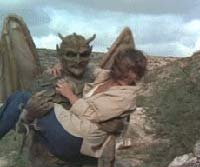 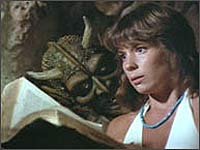 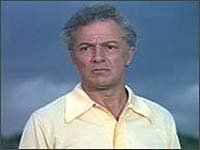 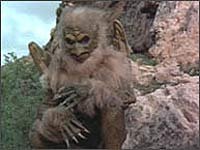 "Gargoyles" is a film that many of us over 30 are familiar with from repeat viewings on late night local creature feature monster movie matinée type screenings, a form of television that has sadly gone extinct. It's been a pleasure to re-discover the film now in the digital age and find that not only does it hold up, but is a superior example of low budget horror trends of the era with it's stark southwestern American locations & dusty, arid themes of supernatural horror, ala "Race With The Devil", "The Devil's Rain", "Brotherhood Of Satan", et al.

The film was actually a CBS television production back in the age when made for TV movies were more than just product placement vehicles. The budgeting was tight and every dime is up there on the screen from a cast of convincing professionals (Cornel Wilde, Jennifer Salt looking fresh, Scott Glenn, good old Woody Chambliss and the scene-stealing Grayson Hall as an irascible drunk), a competently written screenplay by Elinor & Steven Karpf (who would later unleash the lovable "Devil Dog: The Hound of Hell" on unsuspecting audiences), and makeup genius Stan Winston's remarkable gargoyle creations. Sure, they are just stunt actors bedecked in rubber suits, but each of the film's gargoyle characters come across as an individual, and are a far more intriguing population that the film's human indigents. The movie manages to cast its "monsters" in a surprisingly sympathetic light and indeed the human protagonists come across as a bit barbaric as they propose a quick genocide to rid the world of the gargoyle menace.

Which is itself an interesting idea: The term "gargoyle" is actually a word of French derivation ("water-throat") that refers to ornamental fixtures or grotesques on Gothic era cathedrals who's mouths served as water spouts to facilitate the flow of rain buildup from their roofs. A quick search on Google reveals little as far as supernatural mythology of gargoyles and chimera, the non-functional grotesque variety that were added as pure decorations. Some mention is made of tales regarding the gargoyle forms as guarding their cathedrals during the night in a living form and then returning to their stoned state during the day, but such tales were created after the fact to explain why they were so commonly seen. Humans have always had a ghoulish, darker side to them and the forms stuck in the popular consciousness. So enterprising 14th century devotees came up with a fanciful explanation for why they were there for young inquisitive minds, perhaps as a put-on to scare kids into finishing their vegetables. In spite of the film's commanding prologue, however, there are no tales of gargoyles having banded together with Satan to do his bidding on Earth, and in fact the opposite is actually what is implied since they were guarding churches.

Regardless the film is quite convincing in it's suggestion that man and gargoyles have always been at odds (and that they like our women, the pretty ones at least), no doubt helped by the voice of "Star Trek" legend Vic Perrin as both the opening narrator and the voice of the gargoyle leader. His sonorous delivery has been ingrained with a sense of authority in popular culture and one almost expects him to start betting Quatloos on the newcomers as it is impossible to hear him speak and not make the connection. Unless, of course, you don't know your "Star Trek".

Anyway it's a surprisingly sober and professional affair considering the subject matter, with an interesting use of slow motion film effects to give an unearthly feel to the early gargoyle attack scenes that is actually mildly disturbing. This is a film that people remember having seen even after thirty five years, no easy feat. And if I might say, Cornel Wilde comes off as far more convincing as an anthropologist demonology expert who's handy with a shotgun than he did as the natural born Terminator survivalist he played in "The Naked Prey". "Gargoyles" is a better movie too.

810: Deserves to be re-released on DVD as an ode to the genius of Stan Winston, who went on to much bigger and..