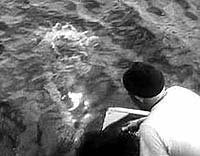 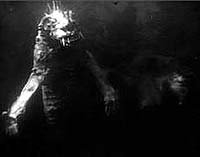 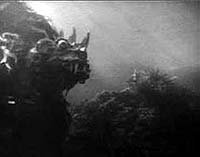 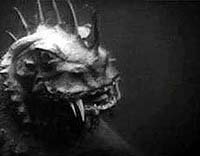 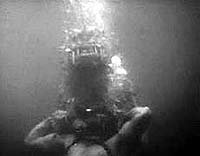 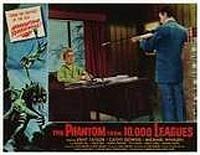 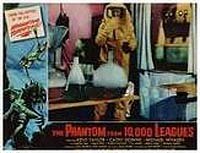 Cathy Downs was one of the sadly unsung great talents of the cinema. However, when one examines her career, it's not that difficult to see why her fame was never particularly wide-spread. Even though she kicked off her career with a great movie, John Ford's poetic Western masterpiece "My Darling Clementine," she nevertheless finished it up with movies that ranked in the categories of being schlocky, dreadful, neglected, and not entertaining. Her career was consumed with films such as "The Phantom from 10,000 Leagues": a horrendously boring and uncared-for creature-feature that makes my heart sink just thinking about it.

So you see, there is this phantom from 10,000 leagues under the sea. Actually, it's not a phantom at all but a sea monster that resembles a cross between a frog and a simian, all simulated using a bulky monster costume so poorly designed and executed that at times, the monster's hands peel, revealing a set of human hands underneath. Oh, and the depth at which it lives is nowhere near 10,000 leagues. Anyway, this 'phantom' was brought into existence because it came into contact with a big shaft of light. And it just so happens this shaft of light was radioactive. And when a human being comes a-swimming or a-rowing, the beastie gets mad and kills them by pulling on their pant legs and rubbing its blocky head against their waists.

Creepy, but...not in the way I think the filmmakers might have intended.

Oh, but wait, I'm misleading you. That's not what this movie's plot is really about. Really, it's about a scientist (Kent Taylor) who meets another scientist (Michael Wahlen) and his daughter (Cathy Downs). Anyway, a government man (Rodney Bell) believes there is no monster killing people, but the older scientist or somebody at his college. Anyway, there's also a secretary who thinks something's up. Anyway, there's also...anyway, anyway, anyway, anyway! Anyway, the movie is overly populated with incredibly dull scenes involving these cornball characters. Their dialogue sequences, meant to construct personalities and characters, stretch on to exhausting length. The performances are not...necessarily bad, but they aren't all that commendable, either. These long stretches of dialogue are increased in their excessive tedium because of poor direction, long wide takes of the camera, and bad misc en scene where an actor's head will be in the second third of the screen and there will be a blank wall on top of them. Even the camera-work is bad. This just makes the movie plod onward for what seems like days and we get very little talk (or concern) about the beastie living in the sea. Not that a project this schlocky would have been monumentally improved with more monster moments, but at least it would have been a little less difficult to suffer through.

I don't know why I even bother with movies with titles like "The Phantom from 10,000 Leagues." I suppose it is because every now and then you do come across one of these movies that is fairly good. I still am slightly embarrassed to admit that I enjoyed "The Killer Shrews." But I did not enjoy a single minute of this picture. And looking back on it and "My Darling Clementine", it's not only boggling that Cathy Downs went from making that to this, but it's also a bit disheartening, too. Here was a great talent thrown shamefully to waste.