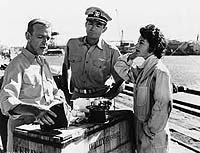 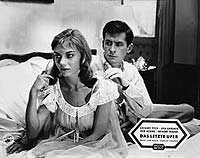 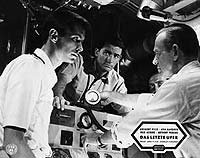 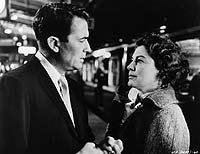 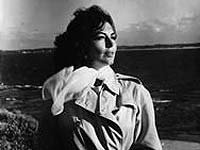 Stanley Kramer is to subtlety what Satan is to decency. In "On the Beach", Kramer uses all his powers of stating-the-obvious to inform us that nuclear weapons are bad. Real bad.

Glossy, immaculate and straining to be "prestigous", "On the Beach" opens with most of planet Earth already decimated. Following an accidentally triggered nuclear war between the United States and the Soviet Union, humanity's survivors congregate in the southern hemisphere. Here they slowly die; radiation is killing off man's last vestiges.

At its best, "On the Beach" boasts an unusual premise, a palatable sense of doom, several haunting sequences evocative of early Antonioni ("Red Desert", "Eclipse") and a fine performance by the soon-to-be forever typecast Anthony Perkins. It also embodies all of Kramer's worst qualities. It is self-righteous, self-congratulatory, hides banal platitudes behind an air of faux "sophistication" and, like most of Kramer's films, believes that "serious subject matter" is inherently "more artistic". Like Steven Spielberg, Kramer makes hokey "serious movies" which mostly miss the points of the topics they're "about". There's also something tasteless about such a self-pitying film aimed at the only nation to ever actually use nukes on human beings.

"The trouble is, you want a simple answer!" a character in "Beach" states, before providing a simple explanation as to why nuclear weapons are bad news. "Everybody had an atomic bomb, and counter-bombs, and counter-counter bombs! The devices outgrew us; we couldn't control them! Somewhere, some poor bloke probably looked at a radar screen and thought he saw something. He knew that if he hesitated for a second that his own country would be wiped off the map. So he pushed a button and the world went crazy!"

In one sense, the character is right. Nukes and nuclear arms races are stupid. But the whole race to build nukes stemmed from old fashioned, early 20th century Imperialism. This accelerated in the 1940s. Here, the British Admiralty, America, Germany, France and later Russia, all began designing neo-weapons so as to maintain their colonies, maintain their Imperialist designs and counter the weapons of their foes. World War 2, of course, then ended with Japan nuked, India and Pakistan split (both would become nuclear powers), Israel born (a nuclear power), France, the US and Britain victorious (all nuclear powers), Russia barricaded and Germany and her Allies crushed. The victors of this conflict then set about looting the planet, making more nukes and conquering the Third World. They also forced upon the weaker nations conditions which prevented them from creating nukes or indeed even conventional armies. This was all sold as "benevolent policing", but really marked a shift into a new form of colonialism.

But the point is: the imperialism which ushers the creation of nukes is also achieved without nukes, today the possession of nukes protects smaller nations from imperialism (no country with nuclear weapons has ever suffered a serious attack), and the imperialism spurring the creation of nukes already does more damage than the damage caused by nukes themselves (humans are already dying, for example, to poverty related starvation at the rate of one atomic bomb being dropped on a densely populated area every 3 days).

"On the Beach" is specifically about a nuclear slugging match between the United States and the USSR. In real life, Russia developed her first nukes in '49, four years after the US nuked Japan. This bombing has been rationalised as "humane" and "necessary", but everyone in command at the time stated otherwise. "Japan was already defeated and dropping the bomb was completely unnecessary," Dwight Eisenhower, Supreme Commander of the Allied Forces, outright stated. "The Japanese position was hopeless even before the first atomic bomb fell," Henry Arnold, Commanding General of the USAF would say. Making this equally explicit was Admiral William D. Leahy, Chief of Staff to President Truman, who said, "The use of the atomic bombs at Hiroshima and Nagasaki were of no material assistance in our war against Japan. The Japanese were already defeated and ready to surrender." And Admiral Chester Nimitiz, Commander in Chief of the US Pacific Fleet: "The Japanese had, in fact, already sued for peace. The atomic bomb played no decisive part, from a purely military point of view, in the defeat of Japan." The US' own Strategic Bombing Survey report would say: "Prior to 31 December 1945, and in all probability prior to 1 November 1945, Japan would have surrendered even if the atomic bombs had not been dropped."

So why nuke Japan? Not for "protecting Americans" - most ventures by US military planners are known to decrease national security -' but to freak out Russia and prevent it impeding Western neo-imperialist designs. Fast forward several decades, and both superpowers had become expert at using each other's nuclear arsenals as bogeymen to both rally their masses and rubber-stamp more naked exploitation. With regards to the United States, economist J. K Galbraith once called this "military Keynesianism": the creation of state-guaranteed markets for high technology waste (armaments), and the using of giant arsenals to leverage policies of intervention in other economies. If nuke wielding baddies didn't exist, the Pentagon would have to invent it, because you can't look good stealing crap if there aren't bogeymen on the block.

Thanks to oil and grain shortages, various embargoes and debts to foreign creditors, the Soviet Union collapsed in the late 1980s. The Cold War thus ended without a nuclear kerfuffle. Today, no leader is likely to use nukes. In politics, public fallout over nuclear fallouts keeps fingers off red buttons. Ironically, if futurologists are correct in their belief that tomorrow's economies will require nuclear energy so as to maintain their insane, accelerating growth rates, then the nuclear fallouts of the future may prove to be even more insidious: slow, wide-spread and sold to you as being 'necessary' for your very survival.