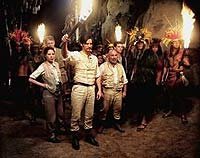 Actually there is no but. I was blown away by the movie and thought it was far better than any of the Jurassic Park movies and I wonder if Michael Crichton's original novel was in fact inspired by Arthur Conan Doyle's. The use of cloning a concept that might not even have been around when the Lost World was written is simply a device used by Chrichton to write a story about modern 'explorers' encountering dinosaurs. Just as the plateau was a device used by Doyle.

Therefore I was disappointed when reading the reviews of this movie that while they were for the most part positive there was virtually always a but. These 'buts' ranged from criticisms of the low quality special effects to the movie being boring in parts mainly because of it's period setting. One person even suggested that the movie was set in the 17th century. Not only was the novel on which this movie was based written by Doyle in the 1900's - the late twentieth century, less than a hundred years ago - I believe that the story was also set during that period.

I can't claim to have read any of Doyle's works although I have always intended to but have always had something else to read when the thought occurs and forget about it later. That said one of the things that impressed me about the movie was how forward-thinking it was with a female heroine who was atypical of the time in which the novel was written and characters whose ethics and attitudes resembled those of people in modern times. You must remember that the idea of what was a good man back then was different to what would be considered a good man now, That said I later found out that character's such as Agnes and the priest were not in the original text so perhaps Doyle was not as forward-thinking as I thought. It would be nice to think that if he saw this adaptation of his novel and the character Agnes that he would think to himself "Damn! Why didn't I think of that?" as opposed to being repulsed by the idea of a female heroine like Agnes.

As for the special effects the fact is that I hate CGi and it doesn't matter if it's a big budget movie or a low budget movie I can nearly always pick it. Unlike Jurassic Park however the Lost World isn't about special effect it's about the characters and when the dinosaurs do show up they were real enough looking for me to suspend my disbelief and enjoy the viewing. Just like everyone else I noticed the lower quality of the special effects but my point is that it didn't bother me and I didn't see the need for people to put it as a 'but' in their reviews. I used to be a big fan of Doctor Who and the tacky special effects never put me off. I still go back and watch the old episodes now and then and get enjoyment out of them. The monsters don't scare me anymore but it's still good viewing.

As for the movie being boring in parts I'd say that's a sign of action junkies whose usual fodder is Jurassic Park and it's ilk. It's a pity because if you can manage to stop squirming in your seat and really pay attention there's a lot worthwhile that can be found in a movie which has nothing to do with the advancing of the plot or action or even high drama. Sometimes the ordinary moments of watching the band of companions sitting around a campfire conversing with an easy camaraderie can be as enjoyable as seeing them be chased by dinosaurs. I liked the whole atmosphere and tone of the movie. It was very British which is probably one of the thing I liked about Doctor Who. I think there are a lot of qualities about British society in the early 1900s that I find appealing even if I wouldn't have really wanted to live in those times.

Anyway in summing up my review I loved The Lost World and only wish that Doyle's original novel had of had some of the new elements in the movie so that I could respect him more. I'll definitely have to read some of his novels very soon.

One more thing someone said this movie was 'campy' and 'not to be taken seriously'. Why shouldn't it be taken seriously? I ask. I don't think it was either intended to be a comedy or corny and I confess to not knowing what campy means except for a vague idea and I don't think that applies. I took it as seriously as I would any other drama or sci-fifantasy movie and none of the characters seemed fake or put there for comic relief to me. I felt this movie had a number of dimensions that were far from 'campy' such as it's exploration of ethics and the human tendency to destroy in quest for knowledge.

Review by andramus from the Internet Movie Database.