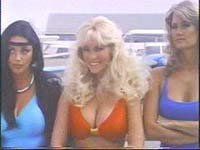 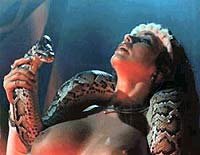 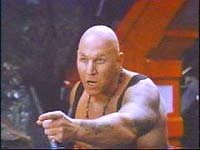 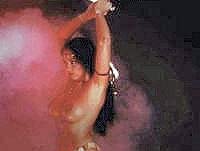 Prolific and dependable B level filmmaker Jim Wynorski had started out working for Roger Corman, and began his respectable directing career with this exploitation epic that he wrote, produced, and directed. All the hallmarks of his work are present and accounted for here, including a breezy, campy feel, a heavy sense of humour, a self-awareness (without doing too much winking at the viewer - the actors do have straight faces most of the time), and of course well endowed female cast members baring their breasts whenever an opportunity presents itself. He sure knows what he's doing: the very first shot in his movie is an iris shot that opens up on a womans' cleavage!

The story hits the ground running: tough female cop Angel Wolfe (lovely Melanie Vincz) loses her brother Rob (Bill Thornbury of the "Phantasm" series), who's also a cop, to a trio of deadly ninja types in a bungled robbery. When Rob produces a throwing star kind of weapon left at the scene, it leads Angels' FBI agent boyfriend Rick (Paul Coufos) to believe a religious cult head named Dr. Sin Do could be involved. He knows that Sin Do recruits young women in groups of three to be trained as assassins, so Angel gathers together two of her friends - the Indian warrior Whitestar (Raven De La Croix) and bubbly blonde jailbird Heather McClure (Angela Aames) so that they can infiltrate the madmans' remote island fortress.

There's a delightful cheesy charm to these proceedings, complete with some really fun looking sets and lots of animation effects. The dialogue is amusing, especially when spoken by De La Croix (also the associate producer and designer of her characters' costume); she has a fair number of truly groan inducing one liners to deliver. The colourful lighting is courtesy of Jacques Haitkin ("A Nightmare on Elm Street" '84) and the catchy score by Alan Howarth is reminiscent of the other work he did with John Carpenter in the 1980s.

Wynorski obviously had a lot of fun in the casting decisions: "Phantasm" series villain Angus Scrimm is our nefarious bad guy (although he doesn't show his face until well into the movie), notable screen tough guy Robert Tessier plays Koro, and Blackie Dammett ("National Lampoons' Class Reunion") is the sleazy Prager; there are also cameos for the great Kenneth Tobey (using his character name from "The Thing from Another World"), Linda Shayne (who co-wrote "Screwballs" with Wynorski), and Angelique Pettyjohn ('Get Smart', "Repo Man").

People who adore the wacky side of low budget cinema will likely adore "The Lost Empire" for its spirit and energy...and, of course, the assets of its actresses.