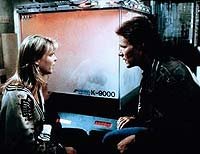 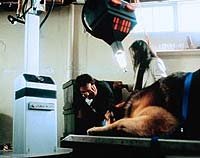 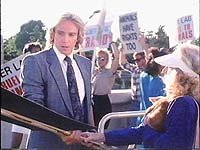 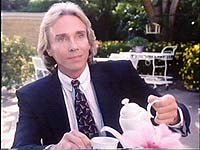 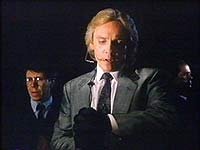 When this movie starts out it seems like it will be a bad "Lethal Weapon" rip-off, even down to the haircuts of the two police officers, then the opening credits appear in that early 1980's sci-fi font (the one still used to write your bank account and routing number on the bottom of your checks) and you start to get an idea of what you're in for. The "Mel Gibson" character, Eddie Monroe, complains that "machines hate him" as he repeatedly tries to use vending machines and they fail to work properly, that's even his response when the captain is curious why he crashed his car through the front window of a Beverly Hills boutique chasing some robbers.

Soon enough, though, some ex-Government agents break into a research lab and steal a proto-type cybernetic dog hybrid, K-9000. K-9000 is a dog with a computer in its brain that can talk to humans with an implant in their heads. The dog is still in an incubator and won't be ready for another day or so. The ex-Government agents apparently working for some foreign power steal all of the equipment for this and kill all of the half dozen people in the building except the head scientist on this project, Aja Turner (an "80's hot" blonde), who manages to escape during the theft and happens to recognize the head of this band of mercenary thieves.

After being put on parking ticket duty for a day for the $280,000 in damages of smashing his car in the clothing store, Monroe and his partner are assigned the case. Monroe manages to find Dr. Turner, and she knows a good place for the bad guys to have set up shop. Luckily she's right. Turner calls his partner for back-up, then he and Dr. Turner proceed to break in. Turner's partner is overheard on the phone by the bad guys inside-man in the police station and is promptly shot on exiting the station. The bad guys are then alerted to the fact Monroe and Turner are in the building. They manage to lock themselves in the room with the dog just as it's hatching fully grown, while the bad guys begin breaking down the door. But wait! The dog needs it's "umbilical cord" to detach from the machine in a few minutes before it can leave. Monroe has Dr. Turner leave out another exit while he waits for the dog and destroys the machines for her (to keep them out of the bad guys hands). Monroe inadvertently causes the machine to put the implant in his. Now he unknowingly can hear K-9000 speak. Meanwhile the aforementioned bad guys are breaking down the door with axes and gain entry just in time to see Monroe writhing on the floor in pain. K-9000 (or "Niner") attacks the bad guys and whisks Monroe out the window into the ocean.

The rest of the movie involves Monroe and K-9000 rescuing Dr. Turner from the bad guys after the capture her and bringing them to justicekilling them. It's a decent made of TV movie was probably intended as pilot to set up a series that never happened. It's filled with plot holes and touches the fringes of camp, but all in all is worth watching if you catch it on TV some Sunday afternoon.

Review by i_saw_the_movie_aliens_twice from the Internet Movie Database.