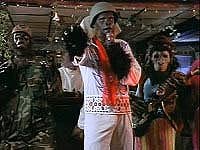 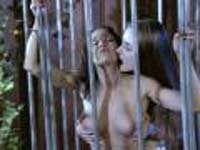 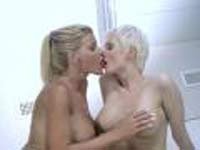 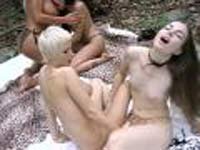 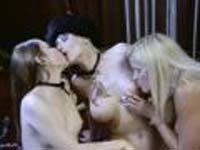 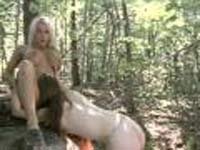 Seduction Cinema's latest cinematic epic is yet another no-budgeted offering packed with simulated sex and not a whole lot else. Obviously using the 2001 remake of PLANET OF THE APES as a basis, director John Bacchus and his crew take the opportunity to poke fun at the characters and plot of the movie, as well as throwing in some predictable dialogue references and Charlton Heston moments into the blend.

The rest is an often dire movie that will only appeal to fans who know what to expect from the studio's unique brand of less-than-stellar entertainment, i.e. lots of beautiful, typically surgically enhanced women engaging in mucho lesbian activity with nary a male in sight. Utilising a female cast which includes scream queen Debbie Rochon (sadly hidden in bad make-up and thus unable to take part in the sexual shenanigans), blonde bimbo Shelby Taylor, the sultry Darian Caine, and up-and-coming cult icon Misty Mundae, 90% of this film's running time consists of unconvincing staged antics as the various female characters lose what little clothing they have and basically fondle each other.

Otherwise the film attempts to be a dumb comedy and succeeds more often than not, with loads of bad "banana" jokes and overacting like there's no tomorrow. Humour is particularly strained and lacking in all areas. Being a science fiction film the requisite special effects of spaceships flying through space and landing in forests are horrendously bad but somehow still appealing via some tacky charm. The "apes" consist of guys in jeans and shirts running around with ape masks and hands and the apparent ideal footwear for astronauts is a pair of trainers wrapped in silver foil. Often the acting is incredibly bad from the female cast members, check out the opening scenes aboard the spaceship for evidence of this - especially the girl playing the Russian. In the same scene, also listen out for special effects which have astonishingly been stolen from the computer game Doom (the sound of the door closing)!

Eventually the plot evaporates completely and the inevitable 'wandering around in the woods' scenario takes over, complete with lots of bizarre and openly silly dance routines which smack of desperation. Meanwhile the various sim-sex scenes are totally unerotic with the seemingly bored actresses going through the motions and not even attempting to act convincingly. If fake breasts, fake tans, tattoos, and copious groping, all set to porn-film music, sounds like your idea of fun then you might enjoy this film - but probably not.