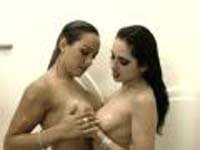 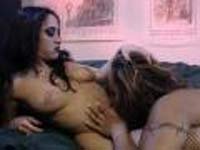 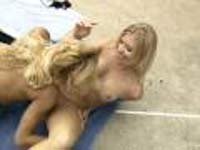 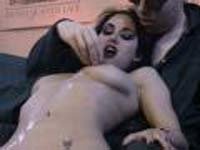 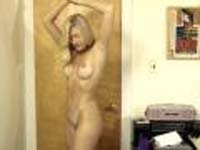 Girl Explores Girl is definitely a mixed bag. The story concerns two aliens (a guy and a girl) who come to earth to learn about sex. The girl goes off and discovers that she's a lesbian. The guy hires strippers. This thing is ultra low budget, with bad dialog and horrible attempts at comedy. It looks like it was filmed at an apartment complex early in the morning when everybody was still asleep.

But then there's everything else involving the female alien (Katie Keane) and the earth girl that she gets the hots for (Natalia Ashe). Katie is a gorgeous blonde with a perfect body. Natalia is plenty nice to look at too. Together they have three excellent scenes which are as good as anything I've ever seen.

In the second scene, Katie introduces herself to Natalia. The two of them strip out of their swimsuits and have hot lesbian sex. Unlike Victoria and Darian, these two girls aren't shy with each other. This pushes softcore as far as it can go and in a few shots definitely crosses into hardcore territory. Katie's orgasm in this scene is fantastic.

The third scene is Katie and Natalia with each other in the swimming pool. Like the second scene, it's just excellent. Both girls don't hold anything back and deliver great orgasms.

The camera work in all three scenes is great. It's never too close to the action and the shots are held for a reasonable amount of time, especially during the orgasms, where it really counts. And the sounds of the girls aren't drowned out by the music.

There was also a boy/girl scene at the beginning that didn't involve any of the above people. It was good. There were also a couple of scenes where Katie is displaying her great body for the camera.

To sum up, about 2/3 of this movie is almost pure torture to watch. But everything else is so perfectly done, I'd actually recommend it.

Review by David Brown from the Internet Movie Database.