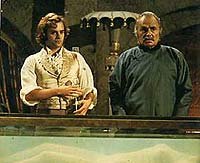 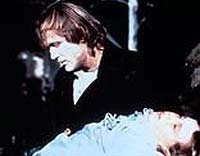 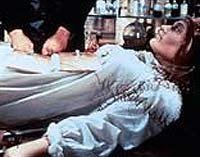 This version of Frankenstein was shown on television in two parts back in 1973. The film starts with a prologue by James Mason that was, for the most part, completely unnecessary. In addition, it shows various clips of the movie that tend to ruin the film to a degree. My advice is skip this and go right to the film.

As for the title, it implies that this is closer to Mary Shelley's original story and in most ways it is closer than other versions---in particular, the famous 1931 version. However, while much closer, a lot of additional material was added and by the two hour mark, it really deviates into a strange direction indeed. I really wish someone would make a version EXACTLY like the book, but so far I have no knowledge of anyone who has done this. The biggest difference the original tale and films have is that the films always spend a lot of time on how the Doctor created his monster--whereas in the book, there's very little about this. Instead, the book emphasizes the lack of responsibility the creator plays towards his creation--the true purpose of the novel. And, fortunately, this movie does focus on this quite a bit...as well as the creation of the monster.

As for the "monster", an interesting choice was made for this film. Instead of the usual hideous man covered in stitches, the producers decided to hire handsome leading man Michael Sarrazin for the role. Initially, he is a very handsome creation--receiving the admiration of others. However, in a very interesting twist, the creation begins to decompose and morph slowly--and then becomes the hideous creature. I liked this approach--as it was very novel and offered something different.

As the man begins to decompose and lose his prettiness, at the same time you slowly see the Doctor become more and more distant from his creation--losing his temper and treating him shabbily. Frankenstein's acting like a jerk is excellent--and more in keeping with the novel--something often forgotten in other versions of the story. In other words, the creation becoming a monster was the result of his being rejected by his creator--not just because he was ugly--though the rejection was not as complete here as in the book.

On his own, the monster is befriended by a blind guy (Ralph Richardson) and this ends in the tragic deaths of his family. For some odd reason, the monster wants the now dead daughter of Richardson (Jan Seymour) to be brought back to life. But, for an even odder reason, instead of taking him to Frankenstein, he brings him to Mason who has been wanting to make his own undead freak. This portion of the film is as far removed from the original story as you can get and the film only gets back to the original story after the whole "Dr. Polidori" segment is complete.

It turns out that Mason was an evil mad scientist (unlike Frankenstein who was just a misguided and irresponsible mad scientist), as he decided to use Sarrazin for his own end--to force Frankenstein to help him make another, and hopefully better, creation using the body of Seymour (among others). After the newest creation comes to life, there is an extended portion of the film involving Seymour--who is a bit of a conniving nympho and nutter! It's as if Seymour is doing a warm-up for her later role in the TV mini-series "East of Eden"! Now, following an attempt by Polidori and Frankenstein to murder the creature, it's no wonder that Sarrazin's character goes insane and starts to do bad things!! How this ends comes as a rather nasty surprise, that's for sure! But, as I said before, none of this bears any resemblance to the original novel and it all seems a bit histrionic.

Now, after two and a half hours, the film finally returns to the book's plot--consisting of a drawn-out portion where the creation goes about destroying the life of his creator. Ultimately, it takes the film to the Arctic for a final showdown--something few movies ever bothered to do, but which was an important part of Shelley's story.

Overall, it was a very enjoyable and lavish film. Unfortunately, it also was NOT the "true story" it purported itself to be, as at times it bore little semblance to Shelley's novel.

Interestingly, 1973 was a banner year for made for TV Frankenstein films (in addition to the freaky Andy Warhol version). In addition to this film, "Wide World Mystery" (ABC) also made their own version that lacked the budget and cast this film had, but which had a much more interesting and sympathetic monster--and, in my opinion, was a better film. I say that you should see them both, though, as they are both very well made in their own way.

By the way, there were a few goofy moments in the film despite it being a pretty good movie. First, watching human limbs retain 'memories' and have the ability to crawl about independently was pretty stupid. It may have looked neat, but just made me groan. Second, the hypnosis scene with James Mason and Agnes Moorehead was also pretty silly--no one can hypnotize anyone like this! Third, while Michael Sarrazin's creature was not too pretty later in the film, he was not THAT ugly and people's reactions to him seemed pretty absurd. I especially laughed when Agnes Moorehead saw him and had a fit and died!!! Talk about silly! And the lightning bolt turning Polidori into an instant skeleton! Ha!