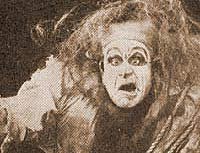 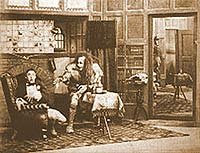 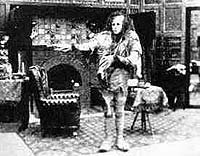 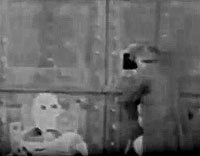 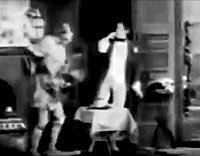 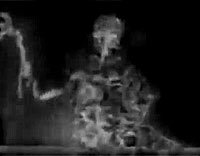 I recently found the Restored version of this silent homage to the Mary Shelley classic tale on YouTube. All quoted passages are taken verbatim from the novel.

The animating of the Creature sequence (3:00 - 6:45) in this short film is unique, I believe. Note the human skeleton prominently displayed therein. I never understood how Frankenstein could make a vigorous eight-foot-tall humanoid from the rotting corpses of normal-sized 19th Century men.

"When I found so astonishing a power placed within my hands, I hesitated a long time concerning the manner in which I should employ it. Although I possessed the capacity of bestowing animation, yet to prepare a frame for the reception of it, with all its intricacies of fibres, muscles, and veins, still remained a work of inconceivable difficulty and labour. I doubted at first whether I should attempt the creation of a being like myself, or one of simpler organisation; but my imagination was too much exalted by my first success to permit me to doubt of my ability to give life to an animal as complex and wonderful as man. The materials at present within my command hardly appeared adequate to so arduous an undertaking; but I doubted not that I should ultimately succeed....It was with these feelings that I began the creation of a human being. As the minuteness of the parts formed a great hindrance to my speed, I resolved, contrary to my first intention, to make the being of a gigantic stature; that is to say, about eight feet in height, and proportionably large. After having formed this determination, and having spent some months in successfully collecting and arranging my materials, I began....These thoughts supported my spirits, while I pursued my undertaking with unremitting ardour. My cheek had grown pale with study, and my person had become emaciated with confinement. Sometimes, on the very brink of certainty, I failed; yet still I clung to the hope which the next day or the next hour might realise. One secret which I alone possessed was the hope to which I had dedicated myself; and the moon gazed on my midnight labours, while, with unrelaxed and breathless eagerness, I pursued nature to her hiding-places. Who shall conceive the horrors of my secret toil, as I dabbled among the unhallowed damps of the grave, or tortured the living animal, to animate the lifeless clay? My limbs now tremble and my eyes swim with the remembrance; but then a resistless, and almost frantic, impulse urged me forward; I seemed to have lost all soul or sensation but for this one pursuit. It was indeed but a passing trance that only made me feel with renewed acuteness so soon as, the unnatural stimulus ceasing to operate, I had returned to my old habits. I collected bones from charnel-houses; and disturbed, with profane fingers, the tremendous secrets of the human frame. In a solitary chamber, or rather cell, at the top of the house, and separated from all the other apartments by a gallery and staircase, I kept my workshop of filthy creation: my eye-balls were starting from their sockets in attending to the details of my employment. The dissecting room and the slaughter-house furnished many of my materials; and often did my human nature turn with loathing from my occupation, whilst, still urged on by an eagerness which perpetually increased, I brought my work near to a conclusion."

Shelley specifically states that intact re-animation of the already-dead would be the second phase of the experiments.

"Pursuing these reflections, I thought, that if I could bestow animation upon lifeless matter, I might in process of time (although I now found it impossible) renew life where death had apparently devoted the body to corruption."

This 14-minute piece is a grand early work, and the accompanying music sets the tone brilliantly. The way J. Searle Dawley ends the story is unique and surprisingly poetic.

Review by raymond_chandler from the Internet Movie Database.