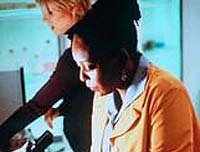 I watched this on the Horror Channel which was weird as it certainly wasn't horror (as indeed is a great deal of The Horror Channel nowadays), the title and premise intrigued me. It has a great central concept reminiscent of an episode of the old sci-fi show Sliders, what would a world without men be like? It has some very interesting set-pieces, the brothel where women go to be 'entertained' (literally and figuratively) by a gang of ageing gigolos, one woman accusing the other of being a 'closet hetero' and the other being jealous that she got to know her father. Its' depiction of an all female world is interesting, a place without war and very little crime, in many ways a paradise on Earth. But girls will still be girls, lustful teenage females still yearn for stubble and a sixpack held against them, older women still crave the adoration and hetero rough and tumble of sex with a male lover.

In contrast to some reviewers I don't think this film is either anti-male or anti-female, if anything it walks the middle line, after the helicopter scene one character remarks that violence isn't a solely male trait and later on we see that neither is ruthlessness (the great Veronica Cartwright giving another smashing performance).

It suffers from a lack of budget and I'd like to have seen more of the reaction of an all-female society to a male on the loose, the militant feminist fringe demonising him, hysterical teenage groupies establishing a fanclub for him, mature women wistfully comparing him to the son they never had. Would be interesting to see a female couple where one is purely a lesbian and is upset that her wifegirlfriend is attracted to a male. It could really do with a slightly higher rating too, the situation lends itself to adultgender based humour but we don't really get to explore that too much which is a shame (amazed they got the scene where the young girl licks the picture of the male centerfold in not to mention the part where the female trick wants her gigilo to slap her around a bit as sexual foreplay). Funny bit where the hero effortlessly outpaces the pursuing female police officers, wouldn't it be hilarious if we also saw him dispose of a spider and change a tyre then get lost because he refuses to ask for directions? It would also be nice to see the flip side, an all male world where there is suddenly a woman introduced but I think that would have a very different (and frankly unpleasant) vibe to it.

All told I think it's ripe for a big budget remake.

Review by Joxerlives from the Internet Movie Database.