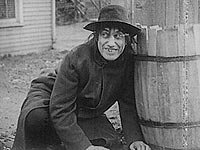 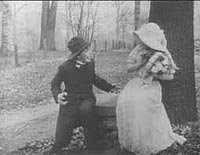 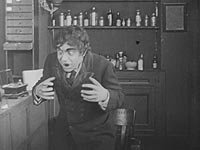 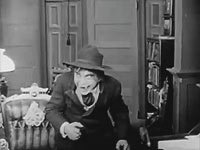 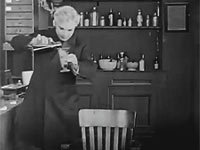 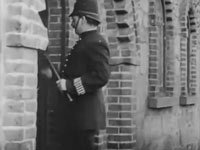 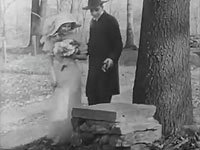 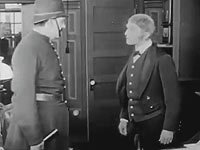 Approaching Robert Louis Stevenson's "The Strange Case of Dr. Jekyll and Mr. Hyde" is pretty much impossible to do in 11 minutes. Then again, tons of short film adaptations were made during the silent era that told stories in even briefer run-times. It is said the first adaptation of this particular story was made in 1908, as a filming of a stage play adaptation (typical of all early story films), but sadly this movie has been lost. A 1910 short was made of it, but that has been lost as well. Thus, this 1912 "adaptation" by Lucias Henderson is the earliest surviving version of Stevenson's book. It is very, very simplistic and doesn't hardly follow the novel, but for the time it's about as good anyone could have done it either way, without a bigger budget.

The story begins with Dr. Jekyll mixing the formula which turns him into Mr. Hyde. He becomes fascinated with the concept and keeps changing himself until he can no longer control the transformations. He starts uncontrollably changing on the spot while making out with his girlfriend (who wasn't even in the book originally but was added for a romantic aspect) so that after a bit she becomes suspicious. Eventually, this all leads up to the simple finale, done in a fairly suspenseful way.

The adaptation excludes some of the most important characters, such as Mr. Utterson, Sir George Carew, and Dr. Lanyon. It's an entertaining film but is by no means an accurate depiction of the original story, so you might be better off reading the book first before watching the film.

Review by He_who_lurks from the Internet Movie Database.