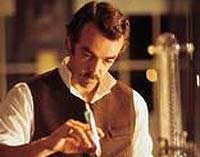 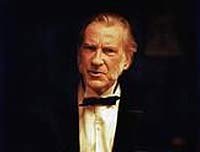 The story if 'The Strange Case of Dr. Jekyll and Mr. Hyde' by Robert Louis Stevenson is already a good, solid one, with powerful and relevant themes in it, on its own. Yet this TV movie chooses to alter the story with as the end result, a movie with a story that lacks a real point or a good main plot line.

The movie mixes several elements from other previous Dr. Jekyll and Mr. Hyde movies (even from "Mary Reilly") but yet it fails to use the most interesting and intriguing elements. The story isn't always interesting enough to follow because of this but in this case that's not just only the scripts fault.

Also of course a big problem of the movie is that it has a typical made-for-TV look, which is never a really positive thing. The costumes and sets are cheap looking and far from impressive. I also really didn't liked the movie its visual style. Judging by this movie I have the feeling that the cinematographer thinks of himself that he is brilliant. He uses artistic positions and lighting with as a result that every sequences feels fabricated and planned out. It makes the movie, story and its characters feel very distant because of this. Also the directing isn't top-class. The movie is filled with a couple of overdone sequences, which mainly feature some slow-motion effects to make the movie feel extra artistic. The end result is the opposite of what the movie makers tried to achieve. Also the musical score is typical simple made-for-TV stuff, which means that's its more distracting and irritating, than that it adds to the atmosphere of the movie.

I at first had trouble seeing John Hannah in the main part as JekyllHyde. I don't know, after his role in the two Mummy movies I have difficulties taking him serious in serious roles, especially when he plays the main character. But once I got accustomed to seeing him playing the JekyllHyde character he was alright. It's too bad that the material and crew he had to work with wasn't the best. Most of the other characters feel like they were just thrown into the story to fill it up. None of them serves a significant enough purpose in the story. Also the actors that portray them aren't the most charismatic or talented persons around, which also certainly obviously doesn't help the movie and story.

The movie tries to be different in its style but especially its story. This movie basically is a free interpretation of the classic 'The Strange Case of Dr. Jekyll and Mr. Hyde' that abandons lots of themes and elements from the novel. The struggle between the good and evil side of a person is brought well and effective to the screen but its too bad that the rest of the story and its alterations work out far from well. The movie lacks a good main plot and purpose. It makes this version of the Jekyll and Hyde story a bit or a redundant one that adds far too little interesting to the classic story.

An original but not interesting enough made-for-TV interpretation of the famous story.