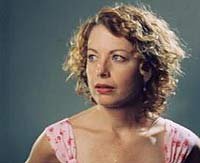 This was a movie that I'm not entirely sure how I got turned on to it. I'm assuming when I was searching out all of the different takes on the story from Robert Louis Stevenson, I found this DVD and picked it up. Musicals are pretty much hit or miss for me, so I was intrigued to see how this would work out. The synopsis is Dr. Henry Jekyll (Alan Bernhoft) experiments with scientific means of revealing the hidden, dark side of man and releases a murderer from within himself.

We start this movie off being in the house of Robert Louis Stevenson. He wakes up in the middle of the night, but all we get are extreme close-ups. I'm assuming he's played by Bernhoft as well. We see though that he's haunted and this seems to be the explanation of how he came up with 'The Strange Case of Henry Jekyll and Mr. Hyde'.

It then shifts us to the present in Los Angeles. Dr. Jekyll performs his experiment and it causes him to become Edward Hyde (Bernhoft). He then goes out into the night to get into some trouble.

The movie then fills out how he got there. Dr. Jekyll is a pretty popular man who used to spend all of his time working in a clinic along with Dr. Richard Lanyon (Terence Marinan). He's fallen off a bit, being wrapped up in his experiments. This has caused his friend Poole (Robert Ricucci) concern along with his girlfriend Anne (Lisa Peterson).

When he finally succeeds in becoming Mr. Hyde, he loses control a bit. This causes him to update his will that if Dr. Jekyll disappears, then Utterson (John David Heffron) is to give control over all of his assets to Mr. Hyde. Dr. Jekyll becomes scared that Mr. Hyde and his unruly behavior are leading him down a path of destruction that will not only ruin his life, but all those around him that he loves.

Now I wasn't sure what I was expecting coming into this to be perfectly honest. The story of Dr. Jekyll and Mr. Hyde is an interesting one with the fact that it is looking at the duality of man when you remove their conscious through science. I think there are some interesting things that can be explored here.

That isn't what we got here though to be honest. There's not really a coherent story here if I'm going to be perfectly honest. The movie does a good job at introducing us to Dr. Jekyll, Mr. Hyde, Anne and Poole. The problem is then we never get to see Anne and Dr. Jekyll interacts after he proposes. There should have been something other than a couple musical numbers, like her going to visit him or seeing Poole to inquire. Something, but we don't get that.

To give a positive, I did like that all of the people that Mr. Hyde targets, for the most part, are people that have semi-wronged Dr. Jekyll, or standing in his way. He goes after Dr. Lanyon when he won't give Mr. Hyde the bag or that Utterson is leery of the changing of the will. This does get thrown out the door though when Amanda Lennox (Susannah Devereux) and Ellie (Maria Anne Kress) are attacked though, this is just they're in the wrong place at the wrong time.

The last aspect that I needed to say something about is the violence toward women here. We get to see two different moments where Mr. Hyde is going after Ellie and Amanda pretty viciously. I don't understand why though. I get that he's supposed to be the embodiment of evil, but it does just felt out of place and wasn't needed. I don't mind attacking them. It just feels over the top.

I'll shift over to the pacing of the movie, which I don't feel there's really a coherent narrative. I will say that I feel that it started off well in introducing us to the characters, but then it really just has musical numbers that don't really go together and then giving us set pieces with different things they came up with. Really the only thing that is keeping it semi together would be Inspector McCree (William Frederick Knight) and his investigation into what Mr. Hyde has been doing. It does feel like an amateur screenplay that focused more on the musical numbers than actually three-act story. I did like how it ended though, but I feel it might have been too long only because what we got didn't really fit together necessarily.

That will take me to the acting, which is kind of hard to talk about. I thought that Bernhoft was fine as Dr. Jekyll and Mr. Hyde, but that is mostly because I thought he was a solid singer. He was pretty wooden aside from that and did a better Mr. Hyde for sure. Peterson was fine along with Devereux, Heffron, Knight, Kress, Marinan and Ricucci. I wasn't really impressed with anyone to be honest, but the singing wasn't bad so I will give credit there.

I should cover the soundtrack next. I don't think it is great by any stretch, but I will give Bernhoft credit. He did come up with some catchy songs. It won't be any that I'll listen to again after now seeing this, but I thought he did a pretty good job there. Some of the ones didn't fit and I think it might have been better suited doing a period piece to be honest. I get it is rock and roll, so they're trying to keep with it in modern times, but I just don't think it worked to be honest.

The last thing was the effects. There were a few times that the musical numbers felt like music videos and I did think that was pretty decent actually. The effects other than that were not very good. I did think that Mr. Hyde's look was fine, the bit of blood we got as well and some of the aftermath of attacks. On the whole, it was below average for me.

So now with that said this movie isn't very good. We definitely are getting an inflated rating on the Internet Movie Database by cast, crew, family and friends in my opinion. I will give credit there were a couple good aspects to the story and some of the musical numbers were catchy. The story was lacking, the acting was decent at best and the effects weren't very good. There really is a missed opportunity here for what Bernhoft did as I do think there is potential. I have to rate this movie as well below average though and this is me trying to find places to give them credit. I don't think I can recommend this if I'm going to be honest, unless you want to have some drinks, seeing some cheesiness and laugh along with the music video style numbers.