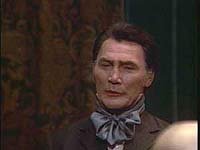 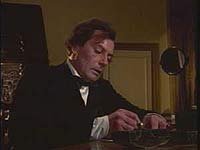 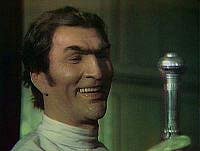 In the late 1960s, Dan Curtis made a name for himself by being the executive producer and writer for "Dark Shadows". In addition, he made a few made for TV horror films--including "Dracula", "The Picture of Dorian Gray" and this film, "The Strange Case of Dr. Jekyll and Mr. Hyde".

One problem with this and all other versions of the story I have seen is that they have the same actor play both Dr. Jekyll AND Mr. Hyde. I say this is a mistake because in Robert Louis Stevenson's novel, the reason why folks could not believe the two men were one was that Hyde was SIGNIFICANTLY shorter than the doctor. In other words, films only use a bit of makeup to make the transformation and the two invariably look too similar to make the story very convincing.

Unlike the movie versions of the story made during the sound era, this one is unusual in that it jumps right into the action. Within a few minutes of the start of the film, Dr. Jekyll has already created his elixir to transform himself into a less restrained persona, Mr. Hyde. His motivations and good works he did before the transformation are really not explored in any depth like other films. I don't think this is a bad thing--just different.

Another thing that was a bit different is that this version is quite a bit more violent than other versions (such as the Frederic March and Spencer Tracy films). Hyde stabs and beats a lot of folks for kicks and seems more nasty than usual. Again, not a bad thing at all--just different. Plus, the awfulness of Hyde is well in keeping with the spirit of the novel.

I think the thing that surprised me the most is that Jack Palance was quite good. He was intense as Hyde and quite restrained as Jekyll. The film also looked exceptional. In particular, the streets of London were quite striking as were the costumes. They got the look down quite well--far better than you'd expect for a made for TV production. As a result, it's about as good a version as you can find--though, as I pointed out above, it sure would be nice to see a version closer to the book in regard to how Hyde looked.