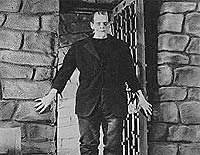 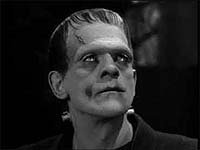 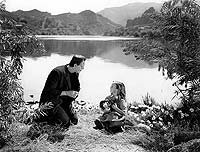 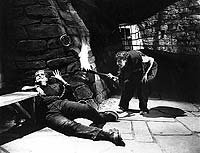 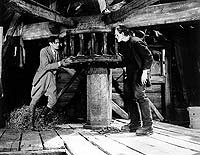 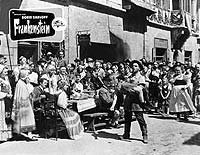 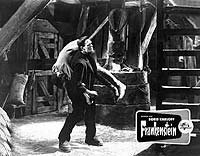 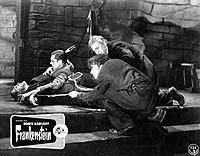 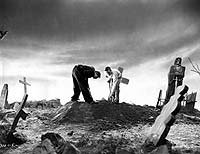 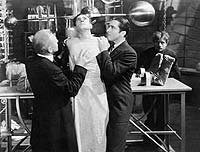 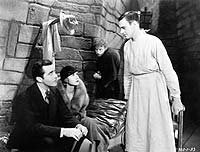 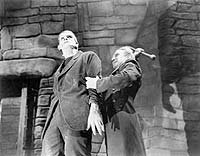 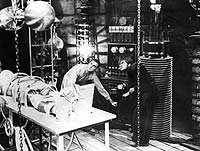 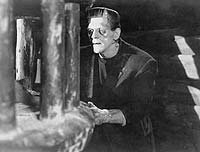 While certainly leagues ahead of Browning's "Dracula", Whale's Frankenstein still creaks aplenty, and in comparison to it's two sequels it looks primitive indeed, and yet....of all the Universal horrors, this is the most compelling and timeless.

I find it ironic how, in discussions of the Frankenstein legend, this film is often considered as just a footnote only worth discussing for the influence it had on physical depictions of the monster, and dismissed in favor of Branagh's "adaption" or Fisher's excellent "Curse of Frankenstein". The rationale is often that those versions are more faithful to the book. But I disagree, and if you care to read, I'll explain why.

I will admit, firsthand, that Branagh's film follows the PLOT of the novel with minimal changes, however I feel that the changes, despite their minimal size, are detrimental to the novel's SPIRIT. And although I will proudly praise Fisher's version, He seems to be less concerned with focusing on the novel's themes than he is with his "F--- the rich" subplot he includes in all his movies. Whale's version discards the plot, but creates an excellent abstract adaption that drives home the novel's themes better than anyone else has, with the exception of "Frankenstein: The True Story" and Fisher's "Frankenstein must be Destroyed". One big complaint, is how Karloff's Monster isn't as sympathetic as the novel's Monster; pure tripe in my opinion.

If anything; Karloff's portrayal is MORE sympathetic than the book's Creature. Critics say that's impossible because the Creature is given a "criminal brain" by Fritz, but that would only be a valid argument if he was shown to be violent solely for that reason, and he isn't. First, "abnormal brain of the typical criminal" could mean anything given the period's beliefs, perhaps the man in question was mentally ill, or had killed in self-defense, or was a minority of some sort. But Karloff's Monster does not turn violent for no reason, he does for flimsy reasons, but reason's nonetheless excusable because he's so stupid he walks backward and doesn't know people can drown. The creature is provoked by the sadistic Fritz, reacts angrily, is taunted, then attacks. Frankenstein, unwilling to take responsibility, has the creature locked away to be "disciplined" by Fritz. The creature kill's Fritz and breaks loose. And even then, his murders are in self-defense or accidents. The book's Creature goes through similar persecution(likely, but left ambiguous because it's told in flashback), but commits murder out of jealousy and to prove points, to COMPLETE innocents. Add the fact that the creature in the book understands the consequences, and feels no remorse until later, it becomes clear that, monster or not, he's a control-freak sociopath like Ted Bundy. The creature of the film is more like a retarded child who lashes out at bullies. The novel's creature kidnaps a child to "make him my companion"(plenty of child-abductors who are not pedophiles do the same thing in real life), then gleefully kills him when he learns he is Frankenstein's brother and frames a servant girl for the murder. In contrast, the film's Creature gently plays with a little girl, but accidentally drowns her, and dies at the hands of a mob who really DON'T have any proof he's guilty, in a scene reminiscent of both a Klan lynching and Christ's crucifixion. Yeah, what an 'unsympathetic' character in comparison to the book(Rolls eyes).

Both characters are unpredictable and dangerous, but does Karloff's Creature really come off as unsympathetic just because he doesn't talk endlessly like the novel's monster? Would you rather pity the equivalent of Ted Bundy because he can talk rather than the equivalent of Lenny from "Of Mice & Men" because he cannot? I also want to point out how, name change and assistant aside, Colin Clive's portrayal of Frankenstein comes closer, personality wise, than any others. Clive is criticized for his hammy "It's Alive!" line, but in the novel, Frankenstein raves like that for SEVERAL CHAPTERS. This film doesn't take the easy way out by making Frankenstein into a monster-hunting hero(Branagh) or into a 19th century Lex Luthor(Fisher); he's like Shelley's portrayal; basically well-meaning and fully blessed with all any man could want, but secretive, callous, neglectful, and unwilling to see consequences until it's either too late or too early. I think Clive's otherwise restrained portrayal fares better than Branagh's, who overacts "It's Alive" style in EVERY scene. The fact that Karloff inspires more fear and more pity with a few grunts than De Niro does in Branagh's whole movie is also telling.

So what exactly is the problem with Whale's film? It features the most spiritually accurate Dr. Frankenstein ever, drives home the themes of the plot better than any other version, the accusation that the monster is unsympathetic is horse ca ca since he's more sympathetic than he is in the actual novel, so what's to hate? The best answer is to visit the comments section for this movie under "hated" and the comment's under "loved" for Branaghs. 99.9% of the complaints are by children who hate it because it's an old movie in black & white, or who make homophobic comment's about James Whale(who was gay). The people who like the Branagh movie mostly just love it because it's in color, or because they are teenage English lit fan girls who think Branagh is hot, and any movie with attractive leads HAS to be better right? If they say they like it because it's more faithful they are lying because they never read it, or did read it but didn't like it, and therefore have no right to demand fidelity to source material they didn't like themselves.

This movie isn't perfect, but of the 3 films I've cited as being the best spiritual adaptations, it's the best. Simply; it's the greatest Frankenstein movie ever made as of now.~.

Review by TheFinalAlias from the Internet Movie Database.