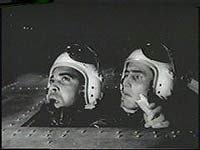 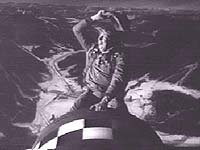 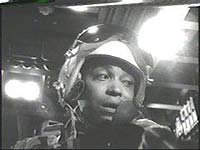 General Robert E Lee allegedly said that it is well that war is so terrible, otherwise we would all become too fond of it. The first half of the twentieth century appeared to have proved him wrong; new forms of warfare were invented, more terrible than anything known in Lee's day, without diminishing mankind's love of armed conflict. Until, that is, the invention of nuclear weapons. Surely, it was argued, the consequences of a war fought with such weapons would be so terrible that only a madman would think of starting a war between two nuclear powers. "Dr Strangelove" identifies a flaw in this theory. What would happen if a madman were ever in a position to start such a war?

The madman in this case is Jack D. Ripper, a US Air Force General who orders the B-52 bombers under his command to attack the Soviet Union. By the time his superiors discover what he has done it is too late to recall the planes, which can only be done by sending a message using only a special code known only to Ripper himself. When it is revealed that any nuclear attack on the Soviet Union will trigger a "doomsday machine" that will destroy all life on earth, the President, Merkin Muffley, is forced to reveal the impending attack to his Soviet counterpart and to offer the Soviets all assistance in shooting the planes down.

As the names of the General and the President might suggest, Kubrick decided to treat this scenario as a satirical black comedy rather than as a serious drama. (Other character names include General Buck Turgidson, Group Captain Lionel Mandrake, Major "King" Kong, Colonel "Bat" Guano and Dr Strangelove, formerly Merkwuerdigliebe, himself). The idea was to satirise not only the theory of nuclear deterrence but also those figures in the political, military and scientific establishments whose attitudes he saw as fuelling the arms race.

Three of the characters, the President, Strangelove and Mandrake, are all played by that great comic actor Peter Sellers. (The inspiration may have been the British black comedy "Kind Hearts and Coronets" in which Alec Guinness also takes on multiple roles). The three roles are very different. President Muffley is an ineffectual liberal unable to control his military chiefs, well-meaning but essentially comic. Strangelove, the President's scientific adviser is a sinister, wheelchair-bound figure, an ex-Nazi with a strong German accent. He is said to have been based on several historical figures, including Edward Teller and Henry Kissinger, but to my mind he bears the closest resemblance to Werner von Braun, famously described by Tom Lehrer as "a man whose allegiance is ruled by expedience". Like Braun, Strangelove has difficulties in deciding whether his allegiance is to America or the Third Reich, and he has a similarly insouciant attitude to the military applications of his scientific work. "If the rockets go up, who cares where they come down".

Mandrake, Ripper's British liaison officer, is a caricature of the stiff-upper-lipped English officer and gentleman. He uses understatement to an absurd extent, describing his wartime experience of torture at the hands of the Japanese only as "not a pretty story". Although he may seem mildly ridiculous, however, Mandrake is the only military officer on display who is not barking mad. Colonel Guano is an obstreperous, thick-headed functionary of the "only-obeying-orders" school. Major Kong, the commander of the one plane to breach the Soviet defences, is a gung-ho Texan who sees himself as a flying cowboy, even wearing a cowboy hat in his plane. This role was originally due to be a fourth role for Sellers; in the event it was played by a veteran Western actor, Slim Pickens.

The two maddest characters are Sterling Hayden's Ripper and George C Scott's Turgidson (both brilliantly played). Ripper is the ultimate conspiracy theorist, the incarnation in military uniform of every saloon-bar maniac who tries to persuade you that Princess Diana, President Kennedy and Marilyn Monroe were assassinated by the forces of international freemasonry. Ripper orders the attack on Russia because of his own pet theory, originally developed to explain away his own impotence, that Communists are attempting to "impurify our precious bodily fluids". Turgidson, as manic as Ripper, urges the President to order all-out nuclear war. Like Mandrake, he is a master of understatement (he describes the results of a nuclear war as "getting our hair mussed"), but his understatement is not the result of emotional reticence but of a refusal to confront the awful reality of what he is proposing. Scott's performance seems to prefigure his portrayal of another obsessive General in "Patton".

Everyone will have their own favourite memories of the film. Mine is probably the scene where Mandrake, attempting to telephone the President with the vital recall codes, is hampered by a lack of small change and by Guano, who refuses to break into a soft-drinks vending machine, but there is also the punch-up between Turgidson and the Soviet Ambassador ("Gentlemen! You can't fight in here! This is the war room!"), the scene where the whooping Kong rides a falling bomb like a rodeo rider and the hilariously inappropriate use of music. ("When Johnny Comes Marching Home" for the bomber scenes, "We'll Meet Again" for the final shots of atomic explosions).

Kubrick was undoubtedly right to make this film as a comedy. A serious drama would today look like an old-fashioned Cold War period piece. (Who now remembers "Fail-Safe"?) "Dr Strangelove" is both of its time and timeless. Although some of its shafts are aimed at the politicians of the day (Turgidson's concern about the "mineshaft gap" parallels Kennedy's attacks on the Eisenhower administration over a supposed missile gap), it remains a brilliant satire on the obsessions, vanity and inanities of political and military leaders. We can all think of examples of what happens to foreign policy when we allow it to be dictated by the Buck Turgidsons of this world.