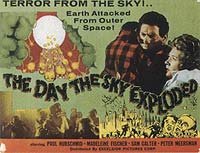 I saw it in 1958 when it came out in the U.S. It was nicely done. Different Italian film effort, but interesting. Some really good special effects for atmosphere disturbances caused by the approaching meteors. I especially enjoyed the affects of seeing a giant dark spot in the sky over New York City with a halo outlining it. There were other nice ones. The meteors were destroyed with every country in the world sending up rockets to pulverize them.

The movie METEOR is based on this 1958 film. Unfortunately for METEOR they used a weak sentimentality of some sort of pseudo solidarity between the U.S., the USSR and Communist China which I found campy. The 1958 film mainly showed missiles being fired toward the heavens from many countries on the globe who are capable of doing so.

Review by Magellan Grey from the Internet Movie Database.